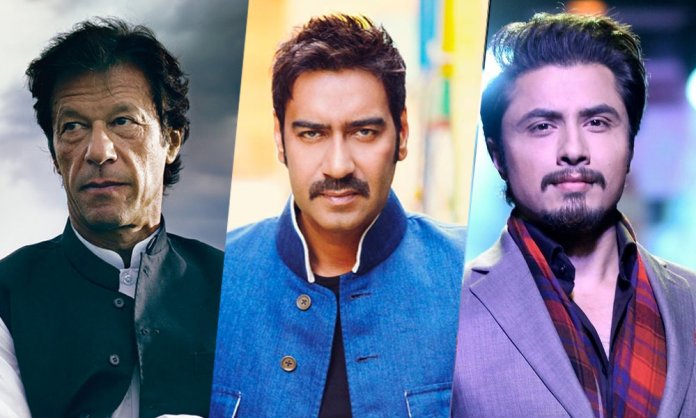 The aftermath of Pulwama attack, that killed around 40 Indian Central Reserve Police Force (CRPF) personnel, continues as more tension builds on both sides of the border.

Prime Minister Imran Khan offered India to investigate and have a dialogue over the issue of terrorism in his speech and have also fully authorized Pakistan Army to respond to any Indian misadventure.

PM Imran Khan’s strong words were immensely appreciated by Pakistanis for his sensible approach towards this issue.

Recently, two Bollywood celebrities have reacted to Ali Zafar’s tweet in which he praised the premier after Imran Khan clarified the stance of Pakistan over Pulwama attack in his speech.

What a speech! @ImranKhanPTI

Bollywood superstar Ajay Devgn who announced that he will not release ‘Total Dhamaal’ in Pakistan, responded to Ali Zafar’s stance in an interview, considering his popularity in India.

Indian singer Sonu Nigam was also asked a similar question to which he said that Ali Zafar is a Pakistani and if Narendra Modi said the same thing about Pakistan, he would have supported it.

Even though Pakistan has denied any involvement in the Pulwama attack, many Bollywood stars alongside Indian government and media, held Pakistan responsible for the unfortunate incident without any proof and expressed their anger through their social media account.