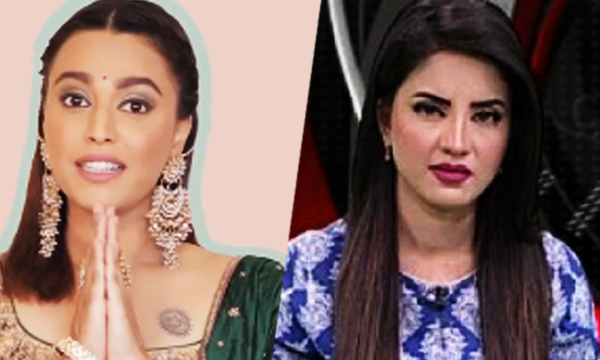 The attack in Pulwama district of Jammu and Kashmir, that killed around 40 Indian Central Reserve Police Force (CRPF) personnel, has worsened the already intense relationship between Pakistan and India.

Alongside Indian government and media, many Bollywood stars including Kangana Ranaut, Paresh Rawal, Javed Akhtar, and others held Pakistan responsible for the unfortunate incident without any proof and expressed their anger through their social media account.

Recently, a Pakistani anchor Kiran Naz bashed the Indian government and media for their hate speech against Pakistan.

During her talk show ‘7 Se 8 Samaa’, Kiran Naz also mentioned that unlike Indian government who is playing cheap tactics like banning Pakistani actors and taking off the portraits of our cricketers, the Prime Minister of Pakistan has come up with a sensible approach to resolve this matter. She also referred to Indian Prime Minister as the ‘Chai Wala’.

Watch the whole video below!

The words of Kiran Naz reached the other side of the border where a Bollywood actress lashed out at her speech.

Swara Bhasker, the Veere Di Wedding actress, took to Twitter to share the clip of Kiran Naz’s talk show and wrote that one of the similarities between Pakistanis and Indians is that they both have got their share of  “unhinged foaming at the mouth TV news anchors”.

Taking a dig at Kiran’s comment on Narendra Modi, Swara asked what is her problem with chai walas?

Arnab ki Pakistani behen!!!!!!! I knew that Indian and Pakistanis were basically the same.. They too have their share of unhinged foaming at the mouth TV news anchors..but aapaa, what is ur problem with chai-wallahs ? 🤣🤣🤣🤣 https://t.co/Z8JOtq4Osh

Earlier, Swara Bhasker appreciated the stance taken by Pakistanis on the Pulwama attack.

Thank you friends from #Pakistan for this message of condolence and peace. Laudable initiative by young Pakistanis. We hear you! 🙏🏿🙏🏿❤️❤️ #Pulwama pic.twitter.com/pJIZKI2c5O

She also condemned the targetting of Kashmiri Muslims in Indian cities and called it ‘inhuman and wrong’!

STOP targeting #KashmiriMuslims in cities of #India … apart from the fact that it’s inhuman and just WRONG .. This is also exactly what the terrorists & their sponsors want!!!! An India which is imploding by infighting! It’s not patriotism.. it’s hateful, wrong & bad strategy!

A few other Indian celebrities also stood up in support of Pakistan and shared their views on this issue including Jaaved Jaaferi, Navjot Singh Sidhu, and Kapil Sharma.

Pakistan has denied any involvement in the Pulwama attack and has offered India to investigate and have a dialogue over the issue of terrorism. However, PM Imran Khan has fully authorized Pakistan Army to befittingly respond to any Indian misadventure.