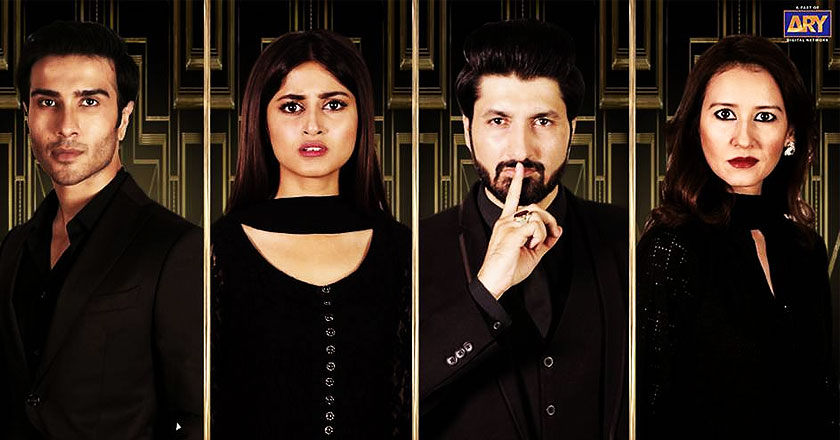 Finally, the silence has truly been broken. ARY’s “most watched drama” of 2015, “Chup Raho” has at last come to a much-awaited end.

It can be said without a doubt that Chup Raho’s initial episodes were an instant hit. With its ratings sky-rocketing after its episode 1 and a strong storyline revolving around the issue of “rape and sexual harassment”, nothing could have stopped Yasir Nawaz’s show of the season to reap high doses of popularity.

But Alas! The drama with its bold taboo topic died a devastating death in the middle only. Pointlessly dragged, the plot that could have been powerful, lost its essence somewhere in between to be engulfed in meaninglessly stretched episodes.

The ending too, did not dawn as a surprise and was quite predictable from the course of the story.

Rameen, played by Sajjal Ali, finally came to know after ages that her beloved hubby Azhar, played by Feroze Khan, is not alive. It had been her brother-in-law Numair, played by Jibran Hyder, who had been fooling her all along by sending emails via his name.

The show closes on Rameen returning to her Saaeein Ji played by Yasir Nawaz, after rescuing her from the evil clutches of her manipulative brother-in-law.

Meanwhile, Numair turns psychotic, filled with remorse for his wicked deeds and with grief of his cancer-stricken daughter.

His wife Manaal, played by Arjumand Rahim, is shown jogging around the memory lane, recalling her earlier mistakes and past moments at her daughter’s death-bed.

Throughout the later episodes of the drama, Rameen’s character as the “seedhi saadhi, bholi -bhaali”, young hopeless maiden got too unbearable to watch. While her horrific past should have made her strong like a survivor, more determined and more fearless; she was shown timid, weak and naïve with her character descending with every passing week.

After all the vile, creepy things Numair did with her, it is a wonder why Rameen was depicted totally dumb and clueless in her innocence. She willingly lives with the rapist who ruined her life and destroyed her home by inflicting perpetual misery and continues to become his puppet by blindly trusting him.

It would have been wonderful to watch the gullible Rameen evolve in to her own hero, seek justice and unveils the devil-in-disguise Numair, who had not only raped her but countless other women before her.

Apparently Chup Raho’s tale, with it’s star-studded cast and the crucial issue of sexual harassment by relatives, failed to rise as an influential role model for the rape survivors our society.

While it could have emerged as the voice of the voiceless rape victims all over the world, it left a message that women will never be able to stand up for themselves, be their own saviors and make a difference unless a prince charming comes and saves them once and for all

Nonetheless, Jibran Hyder displayed brilliant acting as a villain in all the episodes and definitely stole the ending episode with his performance as a psychotic patient.

The acting of Sajjal Ali and Feroze Khan also did justice to their roles. Twitterati too break with mix reviews about the drama.

Check out some of the tweets below:

I hate endings where they make the villian ‘mad’ by the end. He should stay sane to experience the downfall #ChupRaho

#ChupRaho stupidest drama ever. I guess writer thinks Pakis are ullu k p****** Women are really not that fool

1 of the worst drams of recent times, such promise in the beginning but lost all meaning by end. lesson on how not to make a drama #ChupRaho

#chupRaho ended well, but why Azir dint come back 😮 he shouldn’t be dead

What do you think about the ending of Chup Raho? Share your views in the comments below.