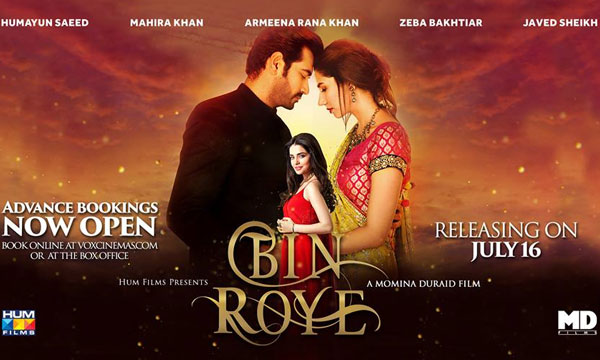 The ARY Film Awards is all set to take place on February 18 will include all films released in 2014 and 2015 in the nominations, however, HUM Films has decided to exclude Bin Roye from the list.

According to HIP, it was revealed that ARY Films would include every Pakistani movie in the nominations irrespective of their production name and banner, but it seems like Bin Roye that earned 150 million on the Box Office will not be a part of this nomination anymore. A source close to ARY Film Awards in their comments said, “We sent them an email regarding Bin Roye, but HUM Films refuses to give a go ahead regarding the film.”

Apart from Bin Roye hype, it was revealed that film like Na Maloom Afraad produced by Filwala production; Moor and Manto produced by Geo Films and Good Morning Karachi (independent film) will also be a part of AFA nominations. The final nominations will be announced on February 1st, seventeen days before the AFA ceremony.

“Manto was the first film that sent an affirmative email and was delighted to be part of AFA, although it is produced by another banner [Geo Films],” the source revealed.

On the other hand, HUM Films denied the news of receiving any such email from the ARY film’s team.

If Bin Roye is excluded from the nomination list, none of the cast including Mahira Khan, Humayun Saeed, Armeena Khan and others will be able to receive any awards, whereas the musicians, technicians, writers and director will also not receive any recognition.

The news is yet to be confirmed by the HUM officials.

Let’s hope for the best and wait until AFA announce their nominations list on February 1.