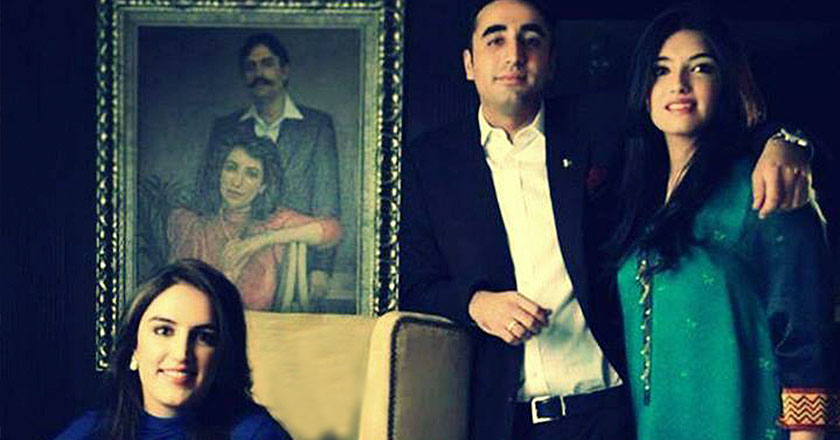 A Kickoff Musical Night on the delicate Mohenjo Daro Ruins and ajrak clad marketing stunts followed by Sindh Fashion Show by Sana Safinaz and now the affiliation with the International film school, ‘Rain-Dance’ that gives birth to ‘Sindh Film Festival.’

It seems the five year long agonizing period of People’s Party’s reign over the country, is the least of their worries as the, Bhutto siblings spend their times in branding Bilawal (or in his own words – ‘Bill-oval’) Bhutto as the next generation Prime Minister.

“Can this all be really that simple? Is this all just a branding tactic?” – The statement surprised No Pakistani Ever. It seems, everyone already Knows, Bill-Oval.

Yes, shockingly, the Bhutto family is not investing millions in Sindh Festival so it could altruistically save the ‘Sindhi Heritage’; in fact the only ‘Sindhi’ thing the festival aims to save has a ‘Bhutto’ at the end of its name.

Asif Zardari, has seemingly become a ghost when it comes to being associated with People’s Party, who could believe the man was practically running Pakistan until a few months back. Ever since, the political clock struck the hour in elections, People’s Party seems to have learnt two major lessons:

– Not being in Government, can spare you so with so much humiliation. Specially, when you have political veterans in your militia like Rehman Malik. Also, that the party is left with very little faces who have yet not embarrassed themselves publically.

– They need a New Face for their Political party. For some inexplicable reason – Mr. Zardari, cannot serve as the humanitarian face of the party anymore.

These realizations gave birth to a fearless leader, the successor of the brave Zulfiqar Ali Bhutto and his valiant daughter Benazir Bhutto, who is a true Leader from the very definition of the word.

He may not be from here, or he may not have studied our books, or perhaps not have faced the difficulties Pakistanis witness every day or has participated in a single election, EVER. One might also doubt if he can even find his way in Garhi Khuda Baksh or anywhere in Pakistan for that matter.

But he is the unanimously selected leader of People’s Party. Since, he is the heir and this is the Game of Thrones. It’s ironic how these political parties, who preach democracy, fail to implement it in their own party leader selection. It is worth noting that Bill-Oval became the Chairman not by a ‘Vote’, but by succession.

Nonetheless these realizations are not new to any Pakistani who has not been living under a rock for his whole life (As a matter of fact, the Pakistanis who are actually living under a rock for their whole life, know a lot more than those who are not. They have been with the Russians, then fought the Russians being friends with the Americans – then fought those Americans)

Nevertheless, again, leaving all this behind – and focusing more on the recent development the veteran Indian actress Shabana Azmi has come to Visit Pakistan, on the happy occasion of the Sindh Festival, in Karachi.

The 63 year old Indian actor is in the country’s largest city to attend the ongoing Sindh Festival on a all-so-special invite from none other than Bilawal Bhutto, the Chairperson of the Pakistan People’s Party.

Shabana Azmi remarked on the event that she would definitely think about working in a Pakistani film if a good script came her way.

“I am happy to be back in Karachi as it is always good to visit Pakistan because there is a lot in common between the people of both the countries,” Azmi further added, “The good thing is that the people are always in contact with each other and we like so many things about each other and also have lot in common in arts and culture,”

With the festival moving forward on its merry way, we hope to see much more of Sindh and much less of Bhutto in the upcoming activities.