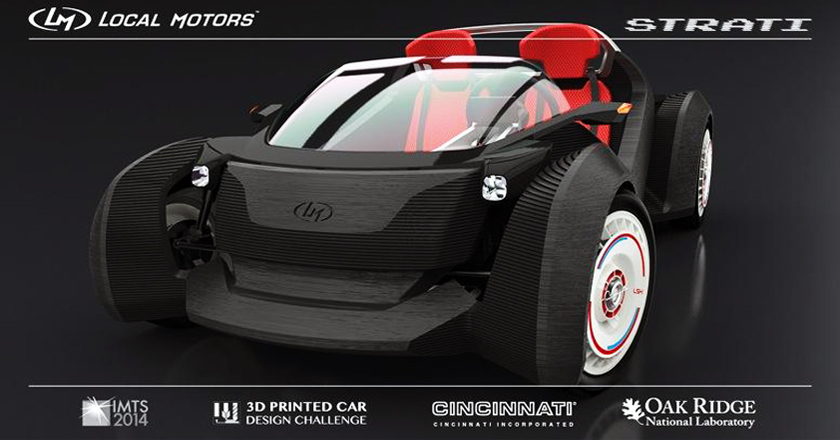 Nothing, any longer, lies outside the paradigm of possibility. The day has come when the world gets to know about its latest weirdest invention, “3D-Printed Car- Strati”.

Previously, there were spectacles like 3D-printed buildings, dresses, hats, jewelry and etc. And now the world has been introduced to Strati, a 3D-printed car which was created using direct digital manufacturing techniques.

So this latest invention, the 3D printed car is titled as Strati. The car is composed of 40 parts which is way lesser than a conventional automobile that usually has more than 20,000 components.

The world’s first 3D printed car is completed in just 44 hours. Strati is the ideation of the Arizona-based Local Motors.  The car is made of one solid piece, and would have a top speed of 40mph and a battery range of about 120 to 150 miles.

The frame and the body of the car are printed by a giant 3D printer but the tires, seats, wheels, battery, wiring, suspension, electric motor and window shield were made by using conventional means. Local Motors plans to sell 3D-printed cars for sale for between £11,000 to £18,000.

This battery-powered, two-passenger car is made of layers of black plastic and protected by carbon fiber.

Local Motors CEO John Rogers told  the Wall Street Journal that they are the first company to make a 3D-printed car using carbon fiber reinforced thermoplastic. About the printer, a machine tool maker, Cincinnati Inc, provided the huge printer, much larger than the usual 3D printers, which are usually 10ins by 10ins.

Local Motors has been creating motorcycles, motorized skateboards and other vehicles since 2007, by the same method.