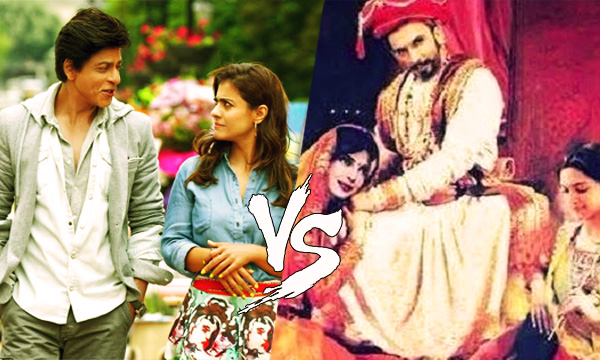 Bollywood’s two most-awaited movies, Dilwale and Bajirao Mastani are facing off at the box office on December 18, 2015. Shah Rukh Khan-Kajol starrer Dilwale and Deepika-Ranveer-Priyanka’s period drama Bajirao Mastani is set to release on the same day. The former is directed by Rohit Shetty and also features Varun Dhawan and Kriti Sanon while the latter is directed by Sanjay Leela Bhansali.

The battle of the movies has received a mixed response from Bollywood critics. Although Bajirao Mastani is a modern-classic, experts are quite hopeful that the combination of Rohit Shetty and SRK will attract the audience to the theaters. Actor Varun Dhawan is also confident about King Khan’s magic. “Of course, the clash is going to affect both the films. But our film has Shah Rukh Khan in it,” he said when a local news source asked for a comment. While the former Miss World Priyanka Chopra termed the battle as “unfortunate”, Deepika Padukone is pretty positive that both movies will do great business.

Filmmaker Sanjay Leela Bhansali has worked really hard to recreate the character of Mastani from historical texts and the paintings of that era. The actress has confessed that it was one of the most challenging films for her.

Producers of both the films have no plans to change their release dates i.e. December 18, 2015. While the promotions for Bajirao Mastani have already begun, the promo of Dilwale will be attached to Prem Ratan Dhan Payo.

The twin blast before the Christmas week is going to be extremely exciting. The SRK craze in Jab Tak Hai Jaan had already set Ajay Devgan’s Son Of Sardaar aside in 2012.

We are eagerly waiting to see which of the two movies will rule the theaters during Christmas and New Year holidays.