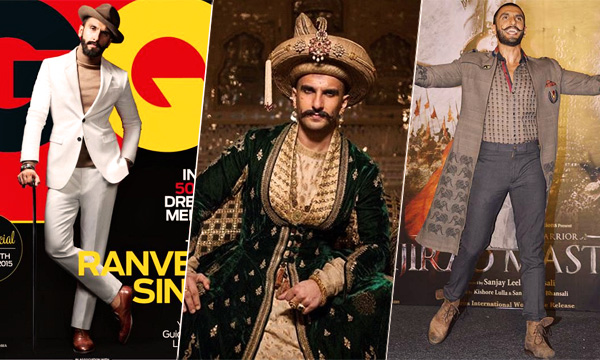 Promotions for Bajirao Mastani are on the way and what with only a few days left for the movie, Ranveer Singh has upped his style game! The versatile actor has not only received critical and commercial acclaim for his acting skills in a variety of roles within a short period of five years, but he has also made headlines for his quirky personality and effortlessly stylish get ups.

His ensembles are unique, his avatars eye-catching. The Ram Leela star has won the GQ’s Most Stylish Award and was recently seen gracing the cover of GQ India’s Best Dressed Men 2015. However, his avatar for his upcoming period movie Bajirao Mastani has pushed all boundaries of fashion to reveal him as the most fashionable man in the country.

Styled by Nishita Gaurav, take a look at Ranveer Singh’s fashionista journey through the production and ongoing promotions of probably his biggest movie to date, Bajirao Mastani: For his boldest avatar yet, Ranveer Singh shaved his head off and donned a long handlebar moustache to transform into the 1800s Maratha warrior, Peshwa Bajirao. At the release of the first song Gajanana, the actor kept it simple with a denim shirt over a black jersey and grey jeans. Pairing it with white high-top sneakers, classic black bowler hat and Ray-Ban sunglasses, the actor looked dapper to say the least.

He was next seen looking razor-sharp at the launch of his first solo poster for the movie in a blue military style jacket, trousers and a cap by Anuj Modi. For the launch of the web series, Blazing Bajirao and Peshwa’s life-sized figurine, the actor channeled the King’s regal look with a turban, gladiator sandals and an ensemble from Anuj Modi’s “Draupadi” collection back from DCW’13. He took his hat off for the first time in a year at the launch of Bajirao Mastani first official trailer and rocked the bald look equally well. The actor donned yet another traditional yet suave look for his appearance at the talk show “Aaj Ki Raat Hai Zindagi” by Amitabh Bachchan. He stunned in a Rohit Bal violet colored velvet jacket with a flared white Kurta and Suthan and two-tone oxfords by Christian Louboutins. For the launch of his song Malhari, the Bajirao star wore two more orthodox Marathi looks with a flourish. At the event in Bhopal, the quirky actor wore a blue dhoti pant, printed shirt and a blue jacket. While later at night, Singh wowed the crowd with a skirt (yes, a skirt!!!) with a dark maroon sherwani coat and brown sandals in Mumbai. While he has pulled off each of his promotional looks with flair and snazz, his looks from the movie are even more impressive.

Be it his crackling chemistry with Deepika or his fierce look as a warrior, Ranveer Singh has truly lived up to his versatile image.