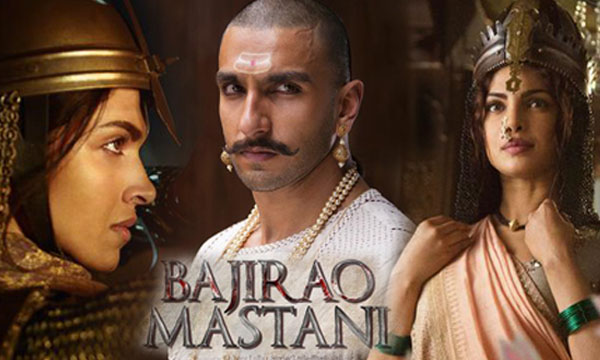 After having guarded his characters’ looks for his dream project for almost a year now, Sanjay Leela Bhansali has rolled out the glimpse of our favorite stars; Ranveer Singh, Deepika Padukone and Priyanka Chopra in Bajirao Mastani’s trailer and web series.

And, from the looks of it, the Game of Thrones-esque storm promised by Ranveer Singh, is definitely something to look forward to.

See the recently launched poster below:

Check out Ranveer’s royal avatar in the tale

We all knew Ranveer was going bald for the upcoming movie but since Bhansali made him wear a hat ALWAYS, we couldn’t quite picture the bald look with the unique mustache that he was sporting all year long.

Finally, here is the complete look unveiled for the Maratha Peshwa Bajirao.

Known for his quirky, unique avatars, Singh has once again impressed us with something different, unlike his fellow actors who can’t seem to shed their boring attires for years on end.

The leading lady, Deepika Padukone, as Bajirao’s warrior queen and girlfriend, Mastani, looks fierce as an archer and we are quite sure the sporty Padukone would pull the tomboyish yet feminine character off quite well.

Here’s the first look of @deepikapadukone as Mastani in the magnum-opus Bajirao Mastani! #1DayToBajiraoMastaniTeaser pic.twitter.com/3RqEduY5Od

On the other hand, Priyanka Chopra too looks all set to impress us with her royal period drama look as Kashibai, Bajirao’s first wife.

And here’s the first look of @priyankachopra as Kashibai in the epic, Bajirao Mastani! #1DayToBajiraoMastaniTeaser pic.twitter.com/uqBR3V21dU

If the presence of three of Bollywood’s finest actors and Ranveer and Deepika’s sizzling chemistry doesn’t convince audiences to go to the cinema, the amazingly well-choreographed dance-off in the movie between the leading ladies definitely will.

Yes, just like the dancing queens, Aishwarya and Madhuri’s dance-off in Devdas, Bhansali has yet another treat for us in the form of Chopra and Padukone showing their Lavani dance moves against each other.

While Bajirao Mastani is slated for release on 18th December 2015, almost five months away, the team is all set to release the trailer in theaters, with yet another highly anticipated movie of the year, Bajrangi Bhaijaan, this Friday.