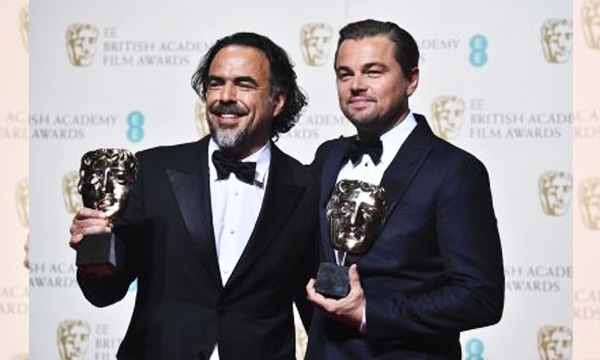 Epic survival tale “The Revenant” took top honours including the best film on Sunday at Britain’s Bafta film awards, boosting its status as a favourite for Oscar success later this month.

“I am overwhelmed,” said Inarritu as he accepted the award at a star-studded ceremony in London.

“I’m shocked and amazed, honoured. To tell you the truth none of this was expected,” said DiCaprio, who used his speech to wish his mother a happy birthday and thank her for driving him to auditions as a child. “We’re so proud of what we’ve accomplished,” DiCaprio added.

After already nabbing the same three awards at last month’s Golden Globes, the film is now seen as a leading contender for Oscar glory in Los Angeles on February 28.

Leonardo DiCaprio’s Oscar Nominated ‘The Revenant’ Releasing All Across Pakistan

The film also took the awards for cinematography and for sound, giving it a total of five British Academy of Film and Television Arts gongs.

It was closely followed by “Mad Max: Fury Road”, George Miller’s visually stunning post-apocalyptic action film which picked up four technical wins including for the scrappy punk costumes of its warring tribes.

The night’s other big winners included Brie Larson, who scooped the best actress for her role in the harrowing kidnapping tale “Room”.

Kate Winslet, who won best supporting actress for her turn as a loyal assistant in the biopic “Steve Jobs”, said it had been an “extraordinary year for women”.

She dedicated her prize “to all those young women that doubt themselves”.

“When I was only 14, I was told by a drama teacher that I might be okay as long as I was happy to settle for the fat girl parts. Look at me now,” she said after accepting the award.

The theme of diversity — or lack of it — hung over the ceremony following a controversy over the lack of people of non-white ethnicities among the Oscar nominations.

A small group calling for a quota system in nominations protested the event, handing out leaflets on the red carpet that called the television industry “male, pale and stale”.

The chair of Bafta Anne Morrison acknowledged the issue in her opening speech to the ceremony, which said those in the industry “have to admit” there was a problem.

“Diversity is high on the agenda right now. At Bafta we welcome that debate,” Morrison said.

“The pressure won’t die down until there is real change on and off screen.”

British comedian Sacha Baron Cohen made a reference to the debate as he stood on stage introducing the best actress prize.

“The nominations for best… WHITE actress are,” Baron Cohen said, before host Stephen Fry interrupted him.

Hotly-tipped “Brooklyn”, a love story about a young Irish woman who emigrates to New York, won outstanding British film but lead actress Saoirse Ronan missed out on an award — but is still in the running for best actress at the upcoming Oscars.

Mark Rylance won the supporting actor award for “Bridge of Spies”, beating Idris Elba who had been nominated for Netflix civil war story “Beasts of No Nation”.

Italy’s composing legend Ennio Morricone picked up an award for original music for his work on Quentin Tarantino’s bloody mystery tale “The Hateful Eight”, making it Morricone’s sixth Bafta in the category.

In the documentary category, home-grown British film “Amy” won out over international competition for its in-depth portrayal of singer Amy Winehouse before she was famous and began to struggle with addiction.

“Star Wars: The Force Awakens” won an award for special visual effects, while “Inside Out” won in the animated film category.

Here are the winners in the main categories:

‘The Revenant’ Movie Ranks No.1 On Worldwide Box Office