Home Articles Azadi March at Red Zone – Is it the Beginning of a...
Advertisement 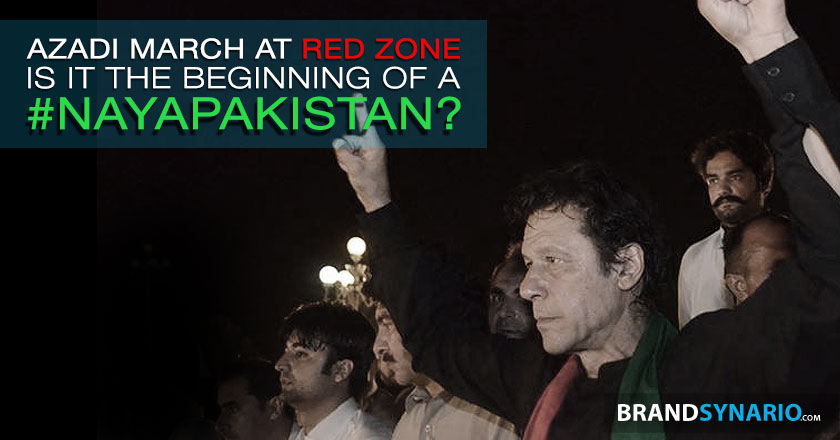 From the moment that Imran Khan gave the call for Dharna (Protest), the situation has become more precarious at every stage.

Imran Khan’s consistent statements regsrding what he terms as unfortunate and unfair election results of 2013, has  invokedmore  criticism in drawing room chats and on social media rather than create waves.

He raised his voice against outright rigging at the supreme podium of the Parliament but none of the other political parties paid any heed to his voice.

He conducted press conferences, knocked on the doors of the judiciary and asked the then Chief justice to take suo motu action against the grave rigging reported in elections, but even the record maker of suo motu, honorable former CJ Iftikhar Mohamad Chaudary gave him a cold shoulder ignoring his demands completely.

The Government of Pakistan which had all the might to take action shrugged off Imran’s demands; it had the backing of the judiciary and  international observers tagged these elections as free and fair.

After a year of perseverance, Imran’s patience was pushed  but his confidence did not shatter. He firmly maintained his stance over the rigging of the last elections and called for a country wide campaign against it by announcing the Azadi March on 14 August, 2014.

The Government still adamant on its stance, did not want to give too much importance to the announcement and  measures were taken to discourage PTI and its supporters. One of these was to implement section 245 giving Islamabad army protection.

Imran and his supporters defied these pressure tactics and proceeded with their plan to march for freedom and attainment of their demands.

The current government of Pakistan, led by PMLN again played its wise card by raising terrorism fears, but even that didn’t work.

The zealour dispalyed by the PTI workers overcame these impediments adding to the pressure on the government.The Azadi March headed towards Islamabad.

The March was attacked by  a Gullu Butt like battalion in Gujranwala, where stones were pelted,slippers thrown and bullets sprayed but the PTI march kept moving undeterred with its dream of achieving a Naya Pakistan intact.

This march reached Islamabad in all its glory that faded the next day when Imran along with all PTI leadership were seen nowhere; the media and the entire nation kept waiting to watch a glimpse of Imran, to listen to his demands but there was complete lull.

This triggered media frustration which oozed out in opinions of news anchors and journalists; suddenly it looked as if Imran had lost the fast gained charisma in those few hours.

During this time, rumors surrounded that protesters had left the venue and had gone to one of  Islamabad’s exotic locations but later that night Imran finally emerged and addressed the crowd, picked the momentum and won back hearts.

The second day the speech went astray; the call of civil disobedience came as a surprise and invoked criticism seen over social media as people called it unrealistic.

Many called it a suicidal attempt from Imran’s side, for his party and his political career. Hopes were lost, faith tilted and government ministers cheered over the situation which was going against PTI’s interests.

The night went by somehow; the clock ticked and Imran addressed the nation on the third day of the Dharna. He explained his stance on his call of civil disobedience, tried to make sense of it and announced the daring call of marching towards the Parliament house.

This address helped Imran regain his footing and pulled the lost favors back in his credit.

The nation eagerly waited for the precarious moment when Imran led the march towards the Parliament house. Doubts flared once again on social media.

Will he be arrested?

All these fears were fortunately put to rest when Imran began his courageous speech on the fourth day of the Dharna tearning him sympathy and prayers from the nation.

Heart beats escalated as protestors marched in unison with PAT’s worker. Slowly and steadily they went ahead, covering the distance peacefully; containers were removed, police personnel waiting ahead showed no resistance and the march successfully reached outside the parliament house.

Imran still sitting with his supporters outside parliament house but those sitting inside the power corridors still engaged in their cunning game trying to tackle Tahirul Qadri supporters by engaging them in talks, satisfying them somehow to make them return to their homes.

The government might be thinking that this way it can easily isolate Imran and PTI workers but PTI’s dynamics unfolded  yet again to the surprise of the government and the nation as well.

Lets wait until the next big surprise comes from this party and stun us all.