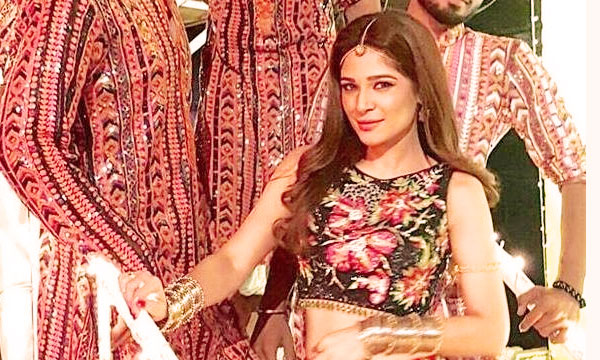 As the Pakistani cinema landscape thrives, Two Plus Two is set to be yet another exciting blend of comedy and action. Following an entirely unique storyline, Two Plus Two will be a startling movie of 2016.

Apart from the sizzling Urwa Hocane the stunning Tutti Frutti starlet, Ayesha Omar is set to mesmerize the audiences with her special appearance in an item number.

Let’s have a look at some exhilarating BTS images from the making of the song:

3 nights of shooting from 10 pm to 7 am ain't easy. Especially when you're also shooting all day for #Bulbulay and surviving on 3 hours of sleep daily. Cannot let the smile drop for the camera…But this ones genuine!! we got visitors to cheer us up for a bit! 😊 #2plus2 #twoplustwo #AyeshaOmar #cameo #aliazmat @sikander_rizvi #pakistanicinema #madeinpakistan The pictures reveal that Nomi Ansari as the official designer for Ayesha’s wardrobe for the song.

Ayesha Omar has sure come a long way, from being a singer, model and gaining fame from Bulbulay, the uber-gorgeous starlet has set a strong foothold in the Pakistani cinema industry. Her recent fame is also accredited to her dance movies on the item number Tutti Frutti in Karachi Se Lahore. Her upcoming movie Yalghaar is also stirring major buzz.

The film will feature Bilal Ashraf , Ali Azmat and Urwa Hocane in different characters. The movie is set to hit the cinemas on Valentine ’s Day, i.e on February 14, 2016.