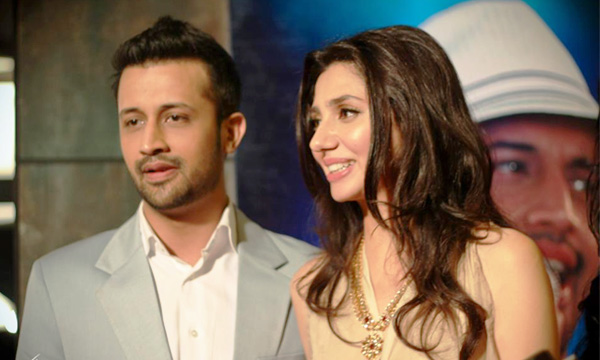 Aren’t  not all excited to Mahira Khan’s Verna to be directed by Shoaib Mansoor? Rumors are that Atif Aslam will be signing up for the film as the hero in the movie.

According to Instep, Atif Aslam is being considered to be as the male lead in the project and chances are that we will soon see him return to the silver screen.

However, the singer is yet to announce the news himself.

Hey guys  Am well rested now and it's time to kick in with some good music / live #concerts / #interviews. In case you haven't heard it , here is the link  https://youtu.be/tGkVxa9rA0U #atifaslam #atifaslamlive #love #india #bollywood

Earlier, we saw Aslam with Mahira Khan in Shoaib Mansoor’s Bol. Both were in supporting roles. Maybe we will see the couple together once again, but this time rumors reveal that they will be seen as the lead in the movie.

Seems like Hum Films Verna is all set to unveil a ground-breaking story, revolving around social issues in Pakistan.

#KHUDAKAYLIYE – A FILM BY #SHOAIBMANSOOR THE FILM IS ABOUT THE DIFFICULT SITUATION IN WHICH PAKISTANIS IN PARTICULAR AND THE MUSLIMS IN GENERAL ARE CAUGHT UP SINCE 9/11. THERE IS A WAR GOING ON BETWEEN FUNDAMENTALISTS AND THE LIBERAL MUSLIM. THIS SITUATION IS CREATING A DRIFT NOT ONLY BETWEEN THE WESTERN WORLD AND THE MUSLIMS BUT ALSO WITHIN THE MUSLIM COMMUNITY. THEY EDUCATED AND MODERN MUSLIMS ARE IN A DIFFICULT SITUATION BECAUSE OF THEIR APPROACH TOWARDS LIFE AND THE WESTERN ATTIRE. THEY ARE CRITICIZED AND HARASSED BY THE FUNDAMENTALISTS AND ON THE OTHER HAND THE WESTERN WORLD SEES THEM AS POTENTIAL SUSPECTS OF TERRORISM JUST BECAUSE OF THEIR MUSLIMS NAMES. THIS PARADOX IS RESULTING IN GREAT SUFFERING FOR A FORWARD LOOKING MUSLIM. THIS IS THE THEME OF THE FILM "KHUDA KAY LIYE" WHICH IN ENGLISH MEANS "IN THE NAME OF GOD". #Pakistan #Lollywood #Pakistani #Films #Movies #Shaan @fawadkhan81 #ImanAli #NaseeruddinShah #RohailHyat #CinemaOfPakistan Year: 2007

Verna’s got some pretty big shoes to fill but we have a feeling the ace filmmaker is up to the challenge. It will be written and directed by the showman Shoaib Mansoor himself under his banner SHOMAN Productions.