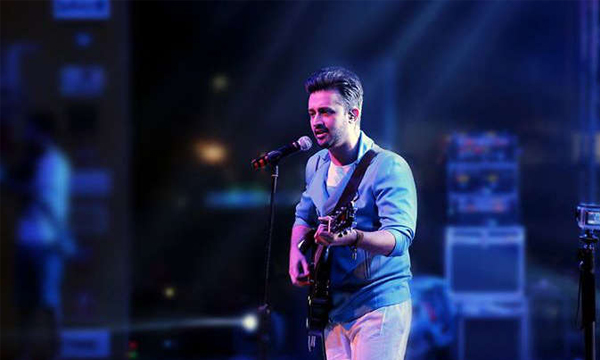 A Pakistani artist in India is definitely news for us! Atif Aslam, who has been a frequent visitor of the country, was recently in Delhi, and has got us all excited with what he has been upto in the country.

Talking to a Pakistani news outlet, the 33-year-old singer gave the inside scoop on what he has been up to in Delhi. Atif Aslam was in India recording a video with the Swedish star, Maher Zain. The former Jal star has made quite a name for himself in Bollywood with tracks such as ‘Woh Lamhey’ from Zeher (2005), ‘Tere Bin’ from Bas Ek Pal (2006) and ‘Tu Jaanay Na’ from Ajab Prem Ki Ghazal Kahani (2010), all of which earned him Filmfare nominations.

What an amazing day with my dear colleagues from #Sweden – #Istanbul. Fun crew and the director @hasankuyucu is a fan of #foofighters too 🙂 – Just a glimpse of something coming your way soon #delhi #atifaslam

“I’m in India to record my music video; it’s a collaboration with a big Swedish star, Maher Zain, whose team approached us after hearing my music and asked for suggestions in terms of producers/video directors from India.”

“The track is titled ‘Am Alive’ and has a very spiritual feel to it; some of my favourite lyrics from the song are Teray ishq mein sharaboor hun. It’s been composed by Dhruv Kanekar and we shot it in Delhi.”

“I had an amazing time shooting in the rain at Jama Masjid and our young actor featured in the video, Justin is brilliant at what he does,” adds the Coke Studio artist.

Atif Aslam who had been on a hiatus, made his comeback last year when he made an appearance on Coke Studio and earlier this year released a track for ‘Tou Dil Karay’, in Asim Raza’s film Ho Mann Jahaan.