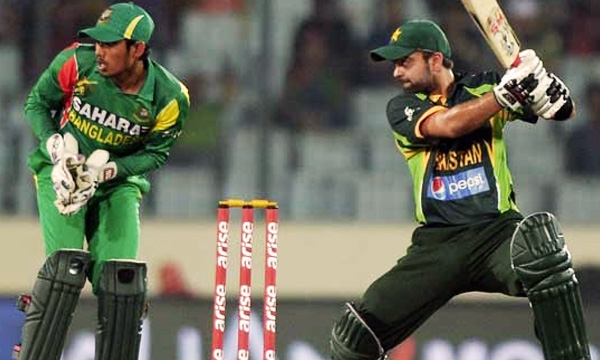 UPDATE:  Bangladesh’s lower-order batsmen kept their cool under pressure to beatPakistan by five wickets in Dhaka on Wednesday, securing them a place in the Asia Cup final. Soumya Sarkar was Bangladesh’s highest scorer with 48 runs, helping his team to 131-5 in 19.1 overs after they restricted Pakistan to 129-7 at the Sher-e-Bangla National Stadium.

The hosts will play their second Asia Cup final against India on March 6. Bangladesh’s Mahmudullah Riyad struck medium pacer Anwar Ali for a boundary to complete the thrilling victory and stay unbeaten on 22. The winning boundary triggered wild celebrations in the dressing room and in the boisterous gallery, where Bangladesh’s Prime Minister Sheikh Hasina was among those watching.

Pakistan has managed to set up 130 runs target for Bangladesh that seems to be a fighting total. Shoaib Malik(41) and Sarfraz Ahmad (58*) saved the team from complete damage  as once it was 28-4 on the score board.

Pakistan set a target of 130 runs for Bangladesh in the T20 Asia Cup. pic.twitter.com/10MyrKjEMs

Pakistani top order batting disappointed again as after first six overs, the team has lost three wickets and added just 20 runs on the board. Pakistan won the toss and elected to bat and  the decision went in opponents’ favor because Bangladeshi bowlers provided the start just what they needed. Khurram Manzoor, Sharjeel Khan, Mohammad Hafeez has been sent back to the pavilion early. We will have to wait and see that if Umar Akmal and Shoaib Malik rescue their side again or not in the must win game.

Pakistan will face off Bangladesh today (Wednesday) in the 8th match of Asia Cup 2016 at Sher-e-Bangla Cricket Stadium in Mirpur, Bangladesh. The match will be starting at 19.00 (local time) and 18.30 (PST).

The match will be a do-or-die situation for Pakistan. If Bangladesh scores in today’s match, they will definitely have a clear path towards Sunday’s final if they can score the third win of the tournament. Bangladesh is not the minnows of cricket anymore as it has been proved by them recently. The hosts surely are threatening Pakistan in their stride to achieve Sunday’s Asian Cup 2016 final against India. Afridi surely is under pressure to deliver as his position has been questioned by the great Javed Miandad himself.

Losing against India, Pakistan has only been victorious against UAE in the past Asia Cup matches. Mohammad Amir has shown true magic with his bowling but much of today’s success will depend on the top order batting where Umar Akmal and Shoaib Malik will have to work their magic.

The left arm pacer in Bangladesh side, Mustafir Rahman will surely be missed in today’s match; he took 2 or 20 in his debut match against Pakistan. However, Bangladesh surely has enough bowling firepower to exploit Mirpur conditions.

With the hard-hitter Tamim Iqbal working his magic, Bangladesh has stunned defending champions Sri Lanka and are a win away from entering the Asia Cup final. The hosts truly could not have asked for a better moral boost; if the Bangladesh batsmen can defend Pakistan’s telling pace attack than half of the job will be done. According to the points table, India is at the number 1 position with six points, followed by Bangladesh that has won two games at the event.

Pakistan and Sri Lanka each have 2 points with one won match each. UAE did not win any game at the event.