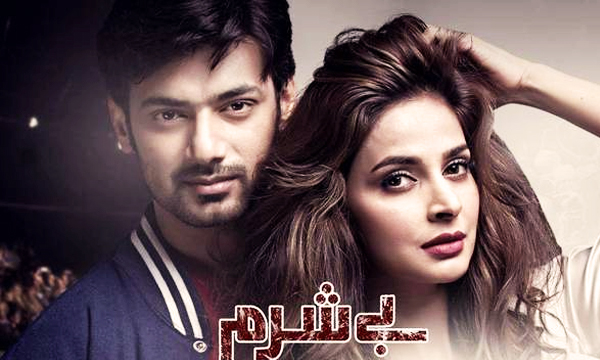 The highly anticipated last episode of ARY digital drama ‘Besharam’ aired Tuesday and it was totally intriguing than ever. Starring the gorgeous Saba Qamar and the very talented Zahid Ahmed, the controversial drama series boldly highlighted the cultural and social stereotypes of the glamor industry and the struggles faced by an upper-class family in a conservative society of Pakistan.

The drama has attracted the masses and has managed to reap very high ratings for the channel. The last episode aired Tuesday, 2nd November and left the audiences in love with the show. Saba Qamar, (Mishal) led a lavish lifestyle until she fell for a social worker and aspiring politician named Haider belonging to a very middle-class lifestyle. Her soaring modeling career creates problems for the couple and Haider’s family is very reluctant to fully accept Mishal.

Despite the conflicts, the two decide to give their marriage a chance, however, the cliched mindset of the male gender does not allow Haider to fully accept her wife the way she is. Mishal leaves her established modeling career but is taunted and mocked by her in-laws every now and then. The 2nd last episode of the drama showed an intense conflict between Mishal and Haider and the fans were anxious to find out what their fate had in store for them.

The last episode of Besharam finally gave us the moment we have all been waiting for “The much awaited Sara’s (Atiqa Odho) Change of Heart”. It was satisfying to see Sara’s conversation with Mishi, confessing to her mistakes and declaring how her children taught her the value of the relationship. In a very serious and ‘unlike Sara’ conversation, she admits to her mistakes and the reason behind her three failed marriages. She tells her daughter Mishi to compromise and accept Haider with all his flaws and shortcomings since he is the ‘ONE’.

Finally, the underlying truth about Asfand Sultan was revealed to Haider! He confessed how through unlawful ways, he became a successful and powerful politician.

Being an outsider, Asfand Sultan does not realize the power of Haider & Mishi’s relationship. However, Haider made it pretty clear to Asfand how wrong he has been and how much his wife, Mishi means to him. He eventually leaves his party and chooses the right path!

Mishi reluctantly accepts a modeling offer but Haider drags her from the sets and brings her back into his life. Mishi realizes that she cannot fall back on her old, modeling career and Haider reached the conclusion that his life is nothing without Mishi. The last scene was emotional and tugs at your heart strings! Despite all the conflicts that their relationship has encountered, the two managed to find their way back to each other.

Drifting off into the sunset on a motorbike? Best last scene of a drama ever.

All thanks to the writer, the script was written beautifully and the direction was on-point!  All the actors in the drama did a wonderful job while the beautiful OST will remain etched in your memory for a long time.

The overall credit of the show’s success can be easily credited to Saba Qamar & Zahid Ahmed’s chemistry on-screen that forced the audiences to tune into the show every week. Even though the show has ended, it taught us a great lesson about relationships and gave us some wonderful moments to cherish.

Directed by Farooq Rind and written by Sarwat Nazir, the drama touched upon one of the most controversial issues of our society. It explored the attitudes towards certain professions, be it modeling or politics. It has also daringly showcased the different criteria the society uses to judge men and women in our culture. Looking forward to similar stories and dramas in the future!

Did you like the last episode of Besharam or were you expecting more? Let us know in the comments section below.