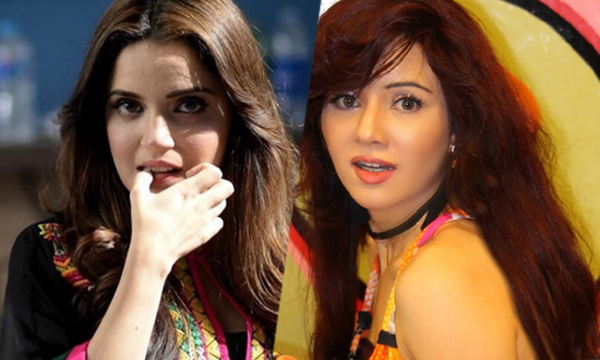 Amidst the rise of #metoo debate in Pakistan, another twitter war on this issue initiated between Janaan actress Armeena Khan and pop singer Rabi Pirzada.

Apparently, the latter tweeted that the actresses should not discuss their incidents of harassment on a public platform.

The war started when the Rabi Pirzada tweeted that harassment is a serious issue and people like Meesha Shafi are taking advantage out of it, while the real victims will continue to be harassed.

Sexual harassment is a very serious, sad and a real issue in pakistan , but people like Meesha, shermeen and aisha gulailai is making a Micky out of it and eventually real young innocent girls will continue to suffer .this “Bold and the beautiful” Spree must be discouraged .

She even faced backlash on this tweet from her followers too

U r right… i wouldn't ve commented this if these stories were not coming out of controversial women. Meesha ayesha umer etc cannot and should not discuss these incidents. I know them more than you do. I respect girls speaking for their rights… but only the RIGHT ones…

BUT you do don’t know ME. How can you presume stuff about me?

To which the pop singer replied:

The twitter war continued with harsh exchange of barbs between them

I just saw your video telling Meera off on her English. May I ask what on earth is “making a micky?” And who are these “right women” who should talk about sexual harassment? Lady, count your blessings. However, you do not discredit or discourage others from doing so. https://t.co/SALf0y91YK

Ms. Pirzada. Thank you. I know we haven’t met ever but I implore you retract the “the right women” only statement. It is only going to bring further disrepute to a justified cause. Misogyny is alive and well and we need to come together. Have a nice day. https://t.co/ypzRO10VK2

She even shut some Twitterati up for accusing the starlet of making fake news for sympathies.

Shut up. I am done with termites like you eating away at the very fabric of society. Get lost.

With the sudden rise of #meeto debate in Pakistan, many celebrities have also stepped forward to share their incidents of sexual harassment which include Ayesha Omer and Momina Mustehsan besides Armeena Khan.

Some people embraced the step while some people think that they come up with such stories for attention.

What do you think about the story? Let us know in the comment section below.