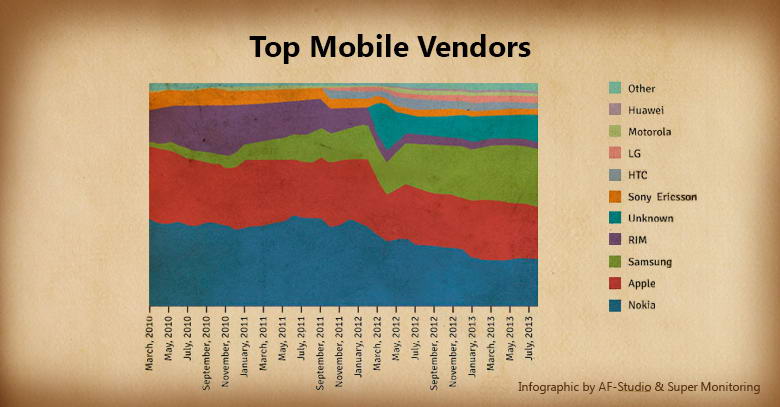 What makes a company the ‘biggest’ in its industry? Is it the market share, the total revenue earned, the awareness a brand has or the sales?

Any marketing academic would tell you that a company is only as big as its future strategy so, in business, the only constant is the “emergence of a new challenger” in the industry.

In the wake of Apple’s emergence with iPhone, the entire landscape of mobile phone industry changed. Before that, Nokia led the market in terms of both sales and market share. All of that changed when six years ago, Apple Corp. launched its first iPhone.

Ever since then, the industry became ‘Blood sport’. iPhone’s reign was first challenged by Samsung and HTC a couple of years ago, then along came LG and other Chinese and Korean smartphone manufacturers.

Recently, Nokia regained some momentum, after collaborating with Windows operating system, and the launch of impressive handsets under its flagship LUMIA series, like LUMIA 1020 or LUMIA 1520.

Smartphone penetration expanded exponentially in the last couple of years and as the graph explains, last three years have seen no monopoly.

In fact last three years belonged to Samsung in terms of Growth, Apple in terms of sustained market presence, RIM in terms of losing share, HTC for maintaining mere existence and lastly Nokia for fighting for its presence.

As tablets are evolving as upper breed of smartphones, Desktop computers are now feared to have the same fate as mobile phones before Smartphones.

However, Tablets still need to perfect their functionality if they ever wish to substitute Desktop PCs, but if they do – the future does not appear all that bright for Desktop PCs because even now Laptops are eating away their market shares.

Now comes the part of Top mobile phone operators preferred by the smartphone users all across the world. Smartphones evolved into an entirely new breed when Apple introduced its iOS for iPhone.

Then Google came along, producing the user-friendly Android operating system. It partnered with Samsung, HTC and LG in providing them with its firmware.

Other smartphone firmware like Blackberry, Series 40, Symbian, Sony Ericsson and others also emerged as they produced their own software.

From January 2010, Android emerged as the largest used mobile phone operating system. iOS maintained its strong presence as it fought for the leading spot with Android, which now sits on almost 1 billion activations.

Nokia’s Symbian OS maintained a surprisingly larger share than most would believe until 2012, after which it faced a substantial decline.

In the epilogue, this picture shows the tale better than a million words.

People use Apple for a whole different reason all together. It’s the aspirational effect of the premium brand that has kept it afloat.

Apple may not lead exponentially in market share, sales or market presence. It surely does lead when it comes to brand loyalty, brand perceived value and hence Total Brand Value which in turn mean higher Customer Satisfaction ratio. Apple has an unparalleled five-star satisfaction ratio.

With Nokia, Samsung, HTC and Motorola on pretty much the same level with three-star satisfaction ratio, the graph illustrates perfectly the current scenario of Smartphone industry. LG and Blackberry (RIM) stay at the bottom with a two-star satisfaction.