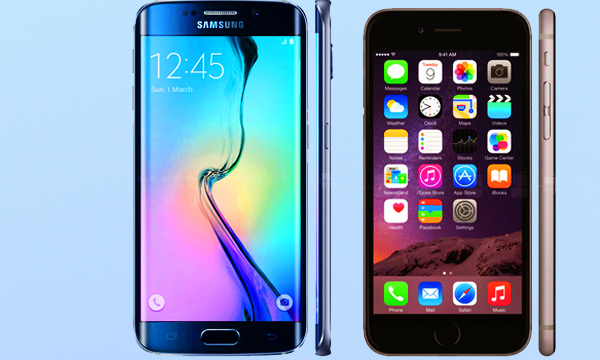 The curtain has been raised off of Apple’s latest edition of the iPhone – the iPhone 6S. The hype created for the release of the iPhone 6S pretty much matched that of its predecessor, the iPhone 6, and Apple is well on track for the iPhone 6S launch to beat the 10 million opening weekend sales from the iPhone 6 last year. As soon as the specifications and details of the phone were released, tech enthusiasts were quick to start making comparisons with the phone’s biggest competitor, the Samsung Galaxy S6 Edge.

The Apple iPhone 6S has inherited the design from the iPhone 6, and there is not much difference in their built. The phone sports a 7.1mm metal unibody that is not unlike that of the iPhone 6. The Samsung S6 Edge, on the other hand, has a premium design and curved screen that gives the phone a completely unique feel. The Galaxy S6 Edge has a slightly slimmer frame at 7.0mm.

The iPhone 6S lacks a big screen, something that the S6 Edge beautifully caters to. The 4.7-inch screen of the iPhone 6S has 1334 x 750 resolution, with a pixel density of 326 pixels per inch (the same as that of the iPhone 6). The Samsung Galaxy S6 Edge holds a 5.1-inch Super AMOLED screen, with 1440 x 2560 resolution and gives an amazingly high pixel density of 577 pixels per inch. The Samsung Galaxy S6 Edge has unsurprisingly extremely sharp colors, but Apple’s IPS LCD display makes for a more natural color output. Additionally, the curved screen edges on the Galaxy S6 Edge not only add style to the phone, but also provide access to new features on the phone – something that the iPhone 6S does not provide or need. The iPhone 6S makes use of the 3D Touch feature, where the display recognizes pressure changes of a person’s finger tap.

Apple iPhones have arguably the best cameras of any smartphone in the market. The Apple iPhone 6S holds a 12 MP main camera, that has been an upgrade from that of the iPhone 6 while it also holds a large 5MP front-camera. The Samsung Galaxy S6 Edge, with its 16MP main camera, could be dubbed as the best camera phone available right now, and with its fast optical image stabilization option takes unbelievably magnificent pictures.

The Samsung Galaxy S6 Edge has a considerably meager 2,600mAh battery, which fails to cater for the otherwise top-notch features of the phone. The iPhone 6S although holds a smaller 1,715mAh battery, Apple has made the performance of its apps much more battery-efficient than they were on the iPhone 6.

In terms of speed and performance, the two phones are fairly equal, with the Apple iPhone 6S sporting a new Apple A9 processor, giving it a major speed boost from its predecessor, while the Samsung Galaxy S6 Edge, with a 3GB RAM and an octa-core Exynos 7420 processor, is quite a fast phone. The two phones, however, will offer a similar real-world performance.

The Samsung Galaxy S6 Edge is available for about PKR 63,000 (or £460, $600, AU$1000), while the Apple iPhone 6S retails for about PKR 70,000 (or £539 $649, AU$1,079) exclusive of all the taxes and duties, since it is still new. The two phones boggle the mind in terms of the premium quality they provide. The features on both are unbelievable and unique in their own rights and account for wonderful smartphone usage experiences!