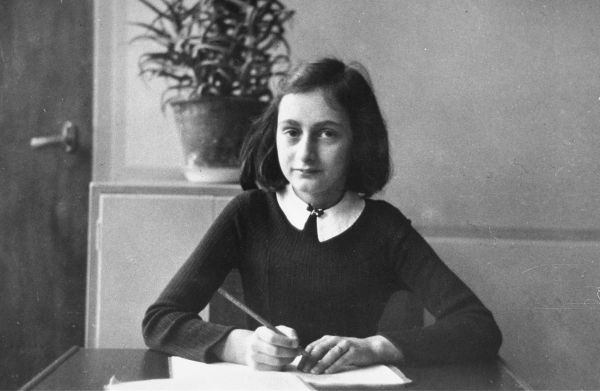 A book of fairy tales owned and signed by German-born Jewish diarist Anne Frank before she perished in the Holocaust will go on sale in New York valued at $20,000 to $30,000, an auction house said Wednesday.

The well-worn edition of Grimm’s fairy tales in German, which includes favorites Snow White and Hansel and Gretel, belonged to Frank and her sister Margot before they went into hiding in 1942 to escape the Nazis.

Frank wrote her name and that of her sister on the fly leaf, said Swann Auction Galleries, which will conduct the sale on May 5. The book will go on public display in its New York showroom on May 2.

The handwriting matches other samples written by Anne Frank, said the auction house. The inside cover of the book is stamped in purple with the initials MF.

It was not known when Frank acquired the book, nor when she signed it. She was born in Frankfurt in 1929 and her sister in 1926. The family moved to Amsterdam in the mid-1930s to escape the Nazis.

The book was published in 1925 in Vienna.

“What just infuses it with so much incredible emotion and history and potential value is the fact that it is signed by Anne Frank. It was her personal copy,” said Nicholas Lowry, president of Swann Auction Galleries.

Anne Frank’s diary, which she wrote in hiding, was published two years after she died, aged 15 in the Bergen-Belsen concentration camp in March 1945, just two months before the Nazis were defeated.

It has sold more than 30 million copies and been translated from the original Dutch into 67 languages.

The teenager also wrote short stories while living in a secret annex with her family and four other Jews until they were betrayed in August 1944.

“This book, a book of Grimms fairy tales, was very likely the well source of all of her inspiration,” said Lowry. “This book really is the springboard from which her nascent literary career and dreams of being a writer were launched.”

Lowry said the pre-sale estimate of the book was $20,000 to $30,000. The well-thumbed volume has 148 pages and is illustrated with black silhouettes. It has some dog-eared pages and a few ink stains.

“There’s no real way of knowing exactly how much it’s going to sell for,” Lowry told AFP. “But the estimate that we’ve put on it, I think, reflects that we’re going to let the market decide.”

Swann Auction Galleries said it is only the third piece of Anne Frank holograph material to come to public sale and the first in nearly 30 years.

In 1988, Swann sold letters and postcards written by the Frank sisters to pen pals in the United States for $165,000.

The book, which was left behind when the family went into hiding, was bought in a bookshop by a family who only realized its progeny in the 1970s, when they wrote to Frank’s father Otto offering to return it, Lowry said.

A letter from Otto, the only person from the annex to survive the war, urging them to keep it in 1977, is being sold with the book.