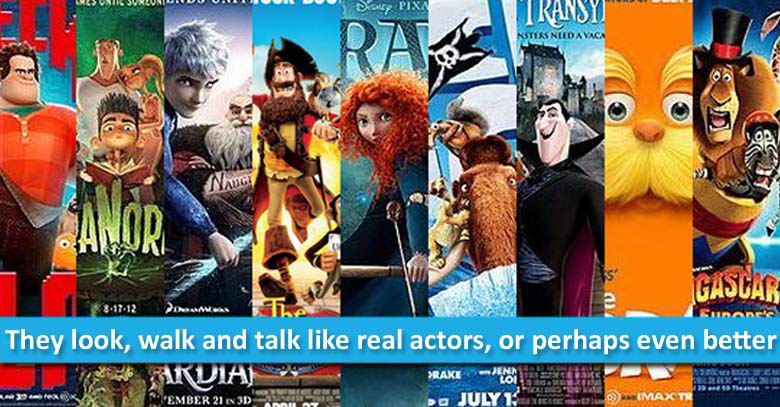 By M. Ejaz Ahmed
They look, walk and talk like real actors, or perhaps even better. With these stars, there are no contentious contract negotiations or on-set meltdowns. They do exactly what the director tells them to do; even curling a lip or flaring up a nostril to the perfect sphere!

With increasing computer-generated imagery (CGI) and animated characters in the movies today, one wonders if the human actor slowly starts walking towards extinction.

This is a debate which probably hasn’t drawn the attention of the critics yet, but this will be the celebs biggest concern soon.

To be able to ponder this, one must recognize the dynamics of film production a bit. Producing a traditional film in today’s time with a good cast and crew costs around $130-150 million approximately, for what production companies hope, to be a hit.

This includes, to name a few; a grand star cast, expensive sets, best technicians and exotic locations. On the contrary, the production of an animated movie with the same hit potential costs around $60 million.

Even though some of the animated movies took the cost up to $90 million such as ‘Rio’, while some like ‘Rango’, even crossed a conventional human movie budget figure.

There are the likes of ‘Avatar’ and ‘Pirates of the Caribbean’, that consumed upto $250 million in production to include both types of filming; a fusion of the conventional cellulose strip and some fancy work on the computer.

So even if the cost is more, which is mainly because of a huge lineup of ‘state-of-the-art’ programmers and graphic designers, the point is they are less hassle to produce.

In an animated movie, you have practically no transportation or materials costs, and no scene production requirements or accommodation. Most importantly, the director gets to avoid the most difficult job of convincing the hero for a shot or running after the heroine to get her make-up fixed quickly. Nonetheless, the human actor still has a role in these movies, which of course is relegated to a voice for the animated character.

There is absolutely no doubt about the importance of audible pitch and tone for the portrayal of a good character and in fact, some of these films are sold because a famous ‘real actor’ has given the voice-over. Be it Johnny Depp as Rango or Anne Hathaway as Jewel, these celebrated silver screen figures are still cashing their fame.

The interesting part is that these animated movies, which were once supposed to be a replacement of cartoon shows for kids, are equally enjoyed by the rest of the cinema going crowd.

The sequel of ‘Kung Fu Panda’ is an endorsement to the success of these movies. Do a random survey around and you’ll find a lot of guys telling you how much they enjoyed ‘Rio’ with their juniors. That being said for the replacement of human actors with animated characters, one still argues that their digital counterparts would rob movie fans of one of their favorite pastimes – celebrity gossips.

Ever since its inception, celebrity gossips and star power are the central motifs of the film industry: Brad Pitt and Angelina Jolie hold audience attention with their personal lives, as much as with their acting ability.

It needs no argument that digital actors would make poor tabloid fodder. After all, page 3 needs something to show off!

Also, an animation may not be able to act, but the human voice conveys most of the ‘human’ emotions. Infact, it is way more economical to pay even a renowned actor for just his voice, then for the whole physical package.

If audiences accept animated movie stars, and Hollywood can still score silver jubilees and earn blockbuster cash without paying millions for the Russel Crowes or Tom Hanks of the world, what’s to stop them from doing so, especially when there are no physical requirements attached with voice acting?

You could have a 4.5 ft. 275 pounder voicing the part of a 5.9 ft. blonde, with the assumed perfect female dimensions.

The discussion still remains unrevealed. Nevertheless, it is safe to say that Hollywood, and other film making nations, will definitely keep on experimenting with animated movies, for as far and as long as the dollars will take them.

That’s the entertainment industry for you and it’s very cruel.