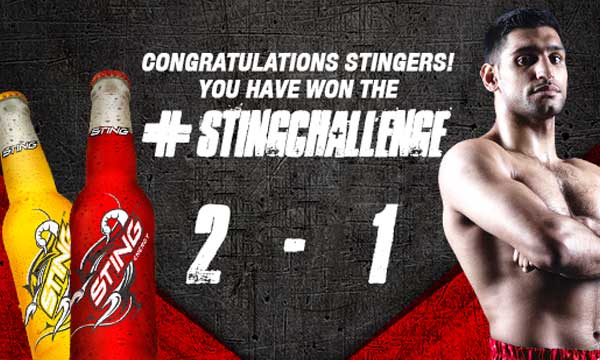 The famous international boxer, Amir Khan has finally completed his final round of #StingChallenge and it’s not what we expected. After wooing the Pakistani crowd with his lightening quick boxing skills and down-to-earth attitude, the 28-year-old Pakistani-born boxer finally put his speed to test in a punching bag match.

But even experts can go wrong only to prove that hard work never ends! Khan lost the final round to the Stringers as he was not able to complete his target. The only ofﬁcial energy drink in the country, Sting bagged the perfect celebrity endorsement when Amir Khan, the international boxing star got on board for a series of interactive sessions with his fans through Sting’s official Facebook and Twitter accounts.

Round 1 of the fan-created challenge gave the famous boxer an unreal target to beat, but he didn’t shy away from it and showed perfect sportsmanship even though the target was to finish 420 skips in one minute. The second round of the activity tested his punch force and he sure showed us who’s got the real energy!

Are you a die-hard Stinger? Tell us what do you want to see next on your favourite energy drink’s social presence in the comments below!