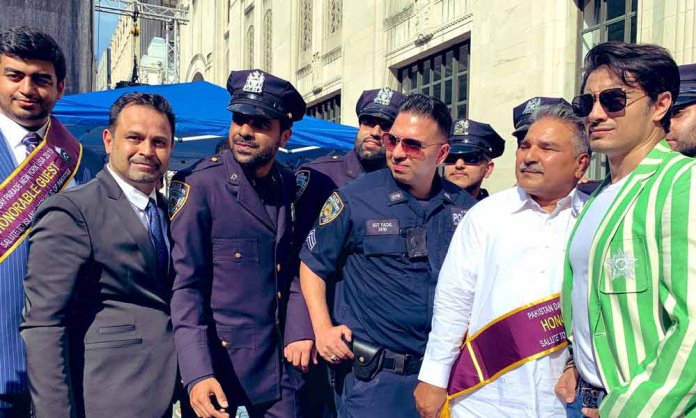 Over the weekend, the 35th annual Pakistan Day parade was held in Manhattan, New York to celebrate Pakistan Day.

The parade was attended by thousands of Pakistani men, women, and children residing in various parts of the United States of America accompanied by an official contingent of New York Police.

The oversees Pakistanis were all chanting “Jeevay Pakistan” with full fervor and patriotism.

#PakistanDayParade is going on at #Manhattan #NewYork 🇵🇰 🇺🇸 pic.twitter.com/hmd92zdAtD

One of the highlights of the parade was the rockstar Ali Zafar’s performance which was truly admired by many.

Your performance was something exceptional today in Pakistan Parade Day @AliZafarsays

It had been announced earlier on by Ali himself that he would be performing on the stage, so many people had been looking forward to it.

‘Hello New York, this is Ali Zafar and I am coming to perform at the biggest Pakistan Day Parade on the 4th of August in New York City. See you all there, it will be lots of fun, will sing and dance, dance and sing,’

Many people drove for ours from other states just to watch him perform.

4 hrs drive from DC to see our Rockstar for one! #allworthit 😭❤️
My most favorite fan moment! Sending loads of love to the Pride of Pakistan 🇵🇰 #PakistanDayParade @AliZafarsays pic.twitter.com/V1othKBNvI

Many made videos and sang and danced along to his tunes.

Alongside patriotic songs, he also sang his other popular ones.

Did any of your friends or loved ones attend the Pakistan Day Parade?

Was Ali Zafar’s performance their favorite part about the parade as well?