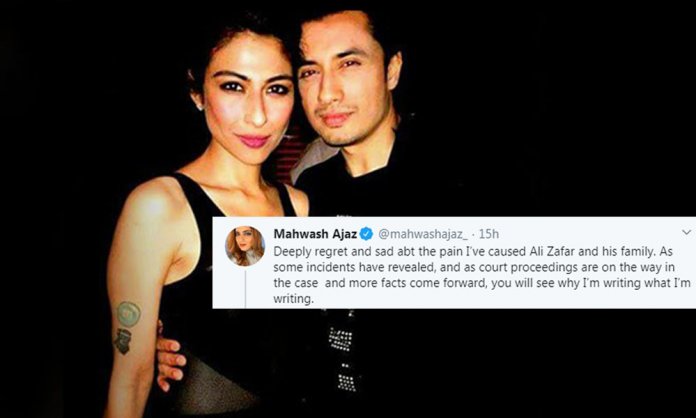 Ali Zafar’s harassment case has been prolonging for more than a year now since musician, Meesha Shafi has accused him of harassment.

Many sided with Meesha including Mahwash Ajaz, a digital media professional, as she struggled through court proceedings since bringing in enough proof of harassment was becoming difficult.

On the 18th of February, Ajaz tweeted rather what came as a shocker. The writer consciously switched sides and apologized publicly to Ali Zafar and his family for causing pain on Twitter.

I write this with pain and anguish and I feel betrayed by many who have claimed to fight for this cause.

Also, I will be taking back all my tweets regarding the allegations against Mr. Zafar and those associated with him.

Ajaz highlighted that “some incidents have revealed” in her tweet which means there is information that is not accessible to the media and will eventually come in the light once court proceedings take place and more facts come forward.

Recently, the news was circulating on social media that the court is currently processing the defamation case against Meesha Shafi.  However, Meesha Shafi’s petition against Ali Zafar has been delayed by Lahore High Court.

#alizafar's defamation case against #meeshashafi is in proceeding whereas #meeshashafi's petition against #alizafar has been delayed by #lahorecourt✨‼😯 . . #pakistani #insta #shoot #dramas #harassment #singer Source: Ebuzz

There have been more cases that have come forward against Ali Zafar. Many on Twitter are having a hard time believing that Shafi might as well be at fault this time.

It also further sensationalises an already messy situation and panders to a certain majority that has already been saying this(ALI is innocent) without proof purely out of dislike for Meesha(& modern women who call our assault in general).