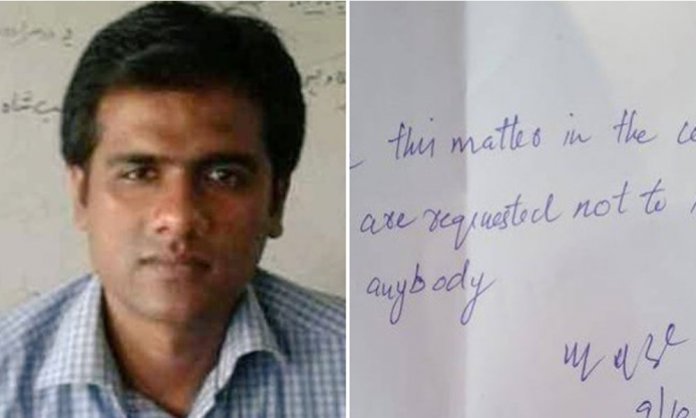 A lecturer at a college in Lahore has committed suicide after becoming a victim of false harassment charges and the misuse of the MeToo Movement.

The institute’s administration failed to issue him a letter clearing him of sexual harassment allegations by a female student.

Muhammad Afzal, a lecturer of English at the Government MAO College, committed suicide earlier this week, the Police confirmed to Geo News on Saturday.

MOA College principal Dr Farhan Ibadat told Geo News he had commanded an inquiry after receiving a harassment complaint from a female student against the lecturer.

He said Dr Alia Rehman was supervising the inquiry and had informed Muhammad Afzal that he was innocent.

“A Mass Com student submitted an application against Afzal which stated that his conduct with female students was inappropriate. The student said that the professor was in the habit of making suggestive remarks and gestures which made female students uncomfortable,” she said, adding that no physical harassment on part of the late lecturer was reported.

“We found that Afzal had turned down the girl’s request to improve her marks which led her to write an application accusing him of harassment,” she admitted.

The lecturer’s letter to Dr Alia Rehman and his suicide note went viral on Twitter and various Facebook groups.

In his letter, Afzal claimed that he was under mental stress due to the allegations levelled against him and wanted his college to give him in writing that the accusations against him were baseless.

Afzal stated in his letter that his family life was disturbed by the allegations and his wife had also left him.

The teacher reportedly ended his life by consuming a toxic substance leaving a note which read, “I leave this matter in the court of Allah” while requesting that “the police are requested not to investigate and bother anybody”.

Following the incident, Pakistani famous singer-actor Ali Zafar, who has also been accused of harassment by college and famous artist Meesha Shafi, has also raised his voice against the misuse of #MeToo movement.

The news took over social media and while many demanded justice for Afzal, others also shared their views that because of a few people, the entire movement should not be dismissed.

Have a look at the social media reactions:

English lecturer in MAO college lahore took his life after false accusations of sexual harassment. Despite being given clean chit after enqiry,the mental torture that he went through could not be recompensed. Such cases are despicable and jeaopardize genuine harassment issues. pic.twitter.com/Bxg3bv20L3

If someone has to die to prove their innocence then we've failed as a society. Life of the victim is ruined when we suppress allegations but we also ruin life of the accused with false allegations. This should teach us to be cautious not ignore harrassment cases #JusticeForAfzal pic.twitter.com/iU6V2xJHc8

If Women r equal to Men then LAWS should b equal too.If a false case is filed in Court;Section 182 is invoked against liar. If sexual Harassment case by female is proved fake,then wat legal remedy is suggested by #MeToo advocates? Dont ruin lives &Mental torture. #JusticeForAfzal

I hate it when the entire media divides in to supporters n haters. For God sake every life is important n precious for us. #JusticeForAfzal should be there. The case should be properly investigated from both sides and there should be reprecussions for false accusations #MeToo pic.twitter.com/wsTHsqTtSt

Can we please start investigations? The girl who accused him falsely needs to be put behind the bars rather than being ignored cuz she is a female. It was not a suicide, it was a murder because his brain could not take all that. #JusticeForAfzal https://t.co/VZk0GvZ4jf

Why are you @nighatdad not speaking now? Where are #MeToo activists? Why they have chosen silence over this suicide. A law should be drafted awarding penalty to false accusers. Enough with misuse of #MeToo! #justiceforafzal https://t.co/hLP4nkfRZf