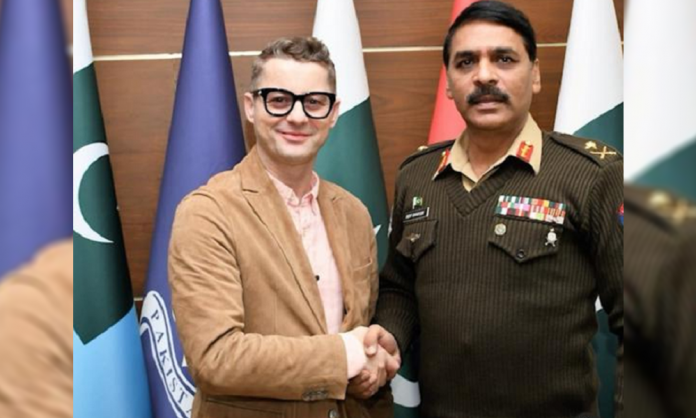 Popular Romanian singer and songwriter Adrian Sina who is a part of the renowned band ‘Akcent’ met DG ISPR Asif Ghafoor in Rawalpindi.

The two took photographs together, Adrian even recorded a video statement expressing his happiness to have come from the Romanian capital Bucharest all the way to the twin cities.

Hello, I am Adrian Sina from Akcent. I am so happy that I have had the chance to travel a long way, from Bucharest, where I live, to Pakistan, to meet the general.

I have discovered, once again, that Pakistani tea is fantastic.

This is the same phrase, ‘the tea is fantastic’ which captured Indian Air Force Wing Commander Abhinandan had said while in Pakistan Air Force custody.

The phrase has since become the punchline to many jokes at the expense of India since this incident.

Social Media is Having a Feild Day!

Do you know this man?
The man promoted Pakistani tea
Tea is fantastic☕ @akcentofficial pic.twitter.com/0eLUJ8181I

On the other hand, the Pakistan Air Force Museum has opened a new gallery called Operation Swift Retort in which they have placed Abhinandan Varthaman’s Mannequin and his MiG21 Fighter Jet Debris that was gathered on display.

Not just that, the gallery also showcases maps, and accessories recovered from the arrested pilot.