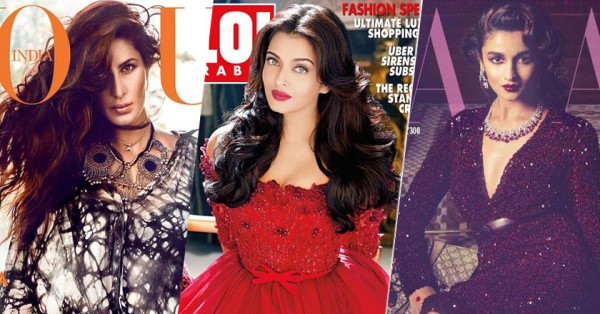 Alia Bhatt, Katrina Kaif and Aishwarya Rai Bachchan has graced the cover of ‘Bazaar Bride’, ‘Vogue India’ and ‘Hello! Indo-Arabia Version respectively. We are in love with these timeless beauties, this goes without any saying!

Her hairdo is particularly vintage and she is sporting alta (bright red dye used on hands and feet, mostly by Bengali brides) on her hands. That’s an Indian touch to the contemporary style. Have a look at her picture below:

Kat, loved for her beauty by almost all the male population, looks divine in the magazine’s cover page and she was styled by the talented Anaita Adajania. The magazine’s claim to reveal a number of confessions made by Katrina. Interesting, isn’t it?

The beautiful mommy, Aish, is back with a Dhoom! Mrs. Bachchan looks stunning in her bright red gown, almost like a dream. The dazzling diva has been featured as an international icon captured like never before. And in the magazine issue, the actor has been introduced as ‘She is destiny’s child, for whom her stardom is as natural as her beauty’.