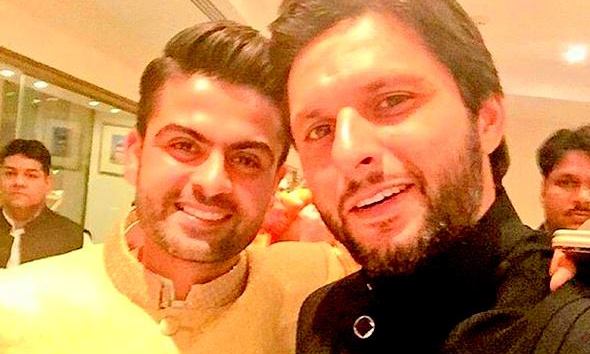 Ahmad Shahzad, Pakistan’s very own selfie king, tied the knot with Sana Murad on 19th September 2015! Cricketers Shahid Afridi and Mohammad Hafiz were present on the occassion, while Afridi was also one of the witness for the Nikkah ceremony.

Surely, Twitteratis were super excited for the grand wedding of the sports star and poured in their love and wishes on social media, which was practically on fire with minute-to-minute updates live from Ahmad and Sana’s wedding ceremony.

Check these glimpses straight from the wedding, as shared by fans of Ahmad Shahzad on Twitter

Congratulations!!! @iamAhmadshahzad for your wedding, may you live long and may Almighty bless you all #AhmadWedsSana pic.twitter.com/V93S02vSBv

@FarazManan thanx m8 for looking after us:) certainly u r marvellous in ur work with a wise head on ur shoulders.. Bigup — Ahmad Shahzad (@iamAhmadshahzad) September 15, 2015

Shahzad and his wife-to-be are one lucky couple! Najam Sethi and Saqlain Mushtaq also congratulated the sports star  via Twitter:

@iamAhmadshahzad, the star of Pak, is getting married on 19th. My best wishes and prayers are with him. More power to his willow! — Najam Sethi (@najamsethi) September 14, 2015

Congratulations to my brother @iamAhmadshahzad who is getting married on 19th. My almighty bless his marriage with happiness and peace. — Saqlain Mushtaq (@Saqlain_Mushtaq) September 14, 2015

Often termed as best friends, Shahid Afridi made public Ahmed Shahzad’s wedding dates, claiming that he has postponed his trip to England to be able to attend his friend’s wedding next month.

Listen to the fun-filled conversation between the two friends: