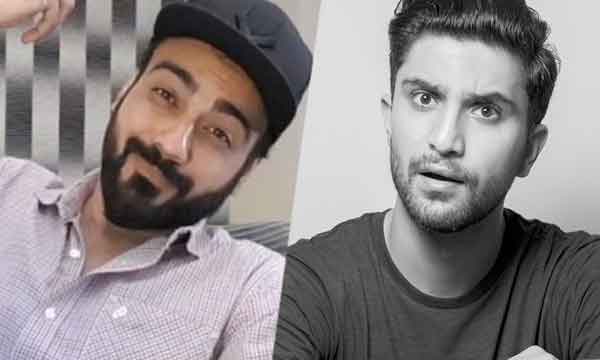 Given the duo’s popularity, the campaign became quite famous in no time and was trending all over social media for featuring the most loved on-screen couple.

However, the ad also caught Arslan Naseer’s attention, the same Arsalan who is known for making hilarious parody videos on his page called Comics by Arslan (CBA). He posted the CBA version of the ad on social media yesterday.

If you have been following Comics by Arslan, you must know that CBA reviews critically analyze every unusual detail in the trending ads or movies in a sarcastic yet hilarious way.

In the video, Arslan said that he received many requests from his followers to post a CBA review of this ad.

He also mentioned that he personally liked the Coca Cola ad and is also a fan of Ahad-Sajal duo before he went on to troll the video in his conventional style.

However, the most interesting thing happened when Ahad Raza Mir himself watched this video and shared his reaction!

Ahad Raza Mir took to Twitter where he shared the CBA- version of the Coca Cola ad. The Aangan actor found it really hilarious and asked CBA not to stop making videos ever!

Arslan Naseer of CBA really appreciated the response from the Parwaaz e Junoon actor and thanked him for his kind words.

Thank you very much bro, glad you liked 🙂

It’s not only Ahad who liked the video but the CBA version of Coca Cola ad is getting hilarious reactions on social media as well.

Mannnn😂😂😂i watched this video almost this evening andddd i was laughing soooo hard😂😂😂😂😂 I'm so hapoy that you liked this videoooo. Aaahad ❤❤❤❤❤❤ and let me tell you a secret. @ComicsByArslan likes your and Sajal Couple. 🙈🙈🙈🌚💜💜💜💜

They also appreciated the gesture of Ahad Raza Mir for taking the humor in a light way!

love how you appreciated the humor! you're a gem Ahad

One thing I love about is that you take everything in a positive way. ❤️ you’re amazing! 🙌♥️

Not everyone takes humor lightly. You’re a gem