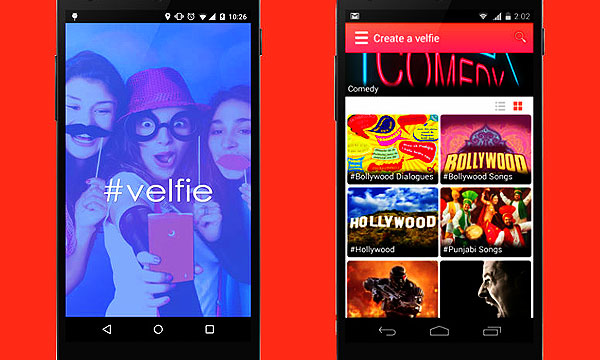 Velfies are the new in-thing, with everybody, from a girl next door to Bollywood glitterati lip-synching to famous scenes from movies and advertisements.

“2014 was about selfies… 2015 is for velfies!” screams the blurb for Velfie, a smartphone app similar to Dubsmash where users mime songs or quotes to pre-recorded audio before posting the clips on social networks.

Dubsmash, developed by a German Company, became an international phenomenon since its launch in November and has been downloaded more than 50 million times across 192 countries, according to its website.

Rammohan Sundaram, co-founder of India’s Velfie, which was launched in April, said videos were a more entertaining way for Bollywood royalty and other celebrities to engage with their audiences.

“A selfie is only one picture, but a ‘velfie’ can speak of emotions that you just can’t render in a single photo,” Sundaram told AFP.

“Selfies will remain because pictures will always be there, but we’re creating a whole new space that’s more exciting, more engaging and more social in nature,” he added.

He differentiates his app from that of Dubsmash by enabling a pause and play feature and the fact that many of the videos are accompanied by subtitles.

“We’ve also made a lot of enhancement filters that make the videos look really good,” the tech developer added.

Their aim is to make it a ‘video social network’ in the coming months. It will enable users to live stream and Sundaram hopes that brands will also use it to advertise.

Apart from that, another new Indian-based app available on Android and iOS is Frankly.me, which allows netizens to pose questions to celebrities, sports stars and politicians who then answer with video selfies.

Users posted around 400,000 questions and around 30,000 have been answered so far.  The founders said that the aim of this app is to aid the democracy in India.

“For the first time in the history of this country we had a state election where candidates were using this platform to talk directly to the electorate and people voted based on the responses,” Co-founder Jain told AFP.

He said that while popular video app Vine was about “broadcasting” short videos which were aimed to create “rich, two-way conversation” with people replying to each other whenever it was convenient for them.

“We believe that video selfies can be the primary mode of all non-urgent communication on the internet,” Jain stated.