Home Articles Advertising During Peshawar School Massacre – Where Do We Draw the Line?
Advertisement 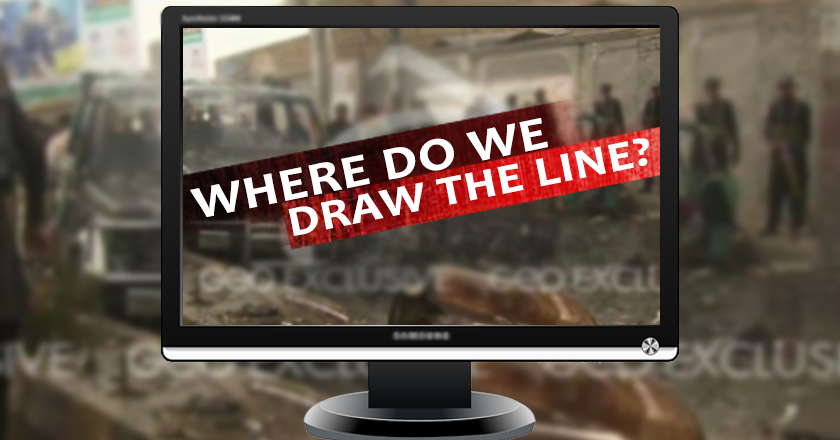 As the entire nation mourns the heartbreaking loss of innocent school children and teachers at the hands of cold-blooded and heartless “religious” warriors, there is an air of wretchedness surrounding every avenue and boulevard, every house and workplace, and each and every individual who proclaims to be a human being.

It is only after the passing of such tragic incidents that we unite as a nation. Social media and electronic media have been abuzz with words of condemnation for the unfortunate events that unfolded yesterday, and acts of solidarity with the affected families, with black display pictures being put up as a sign of bereavement.

However, there was a senseless illustration of commercialism on a majority of news channels whose main aim was to be the first one to break the news and to make sure everybody knew that.

Amid the entire sad and chaotic episode, there were long commercial breaks between the live telecasting of the Peshawar happenings, for unnecessary television commercials depicting all sorts of products.

It is understandable that advertisements and commercials play an integral role in the smooth operation of any form of media, but in light of the ill-fated happenings, where more than 130 children were viciously murdered, television channels should have taken a step back and eased up with the needless advertisements involving joyfully pleasant jingles and/or humorous subjects.

The same was noted by the advertising community of Pakistan who took to social media to express their frustration. In a heated discussion on a group, one member commented:

“It’s disturbing to watch a Montage of such horrific reports and funny, happy, jolly commercial in between.”

Many angry souls took to Twitter in order to express their frustration on the callousness of the media channels.

These ads of tulsi etc that too on news channels.. kya maut walay ghar may ganay bajanay hotay hein? Cant they bloody do without ads today?

The incident has opened many unanswered questions for broadcasters, channels, agencies and advertisers.

Although the technical limitations and approval processes might pose problems but surely no one with a sound mind and living conscience would be interested in watching such forms of entertainment when the heart and soul are so badly shaken.

This form of publicity for any brand at such a depressing point would only weaken their positioning. It is high time that policies be made that refrain advertisement agencies from playing these forms of forced entertainment during such tragic events.

But the questions still remains, how do advertisers and channels deal with such sensitive situation?

One logical idea shared by another member was, “If they take such an action, where they stop such commercials and only show black screens where all these brand logos are there and the message says that in solidarity with the victims of the tragedy the advertisements will be off air for a few hours. Imagine the positive impact that will create for their own brand. No CSR can do it for them. In any case regular advertisement s impact is diluted at such a gut wrenching tragic accident. It’s no one loss. If anything it’s disturbing.”

This act of unpleasant journalism and forced elucidation is as uneasy to witness as it gets! How far below the ground have we fallen as a nation? Where does all this cruelty and the race-for-ratings end? If this is a form of enlightenment, then we, as a nation, would prefer staying unapprised!