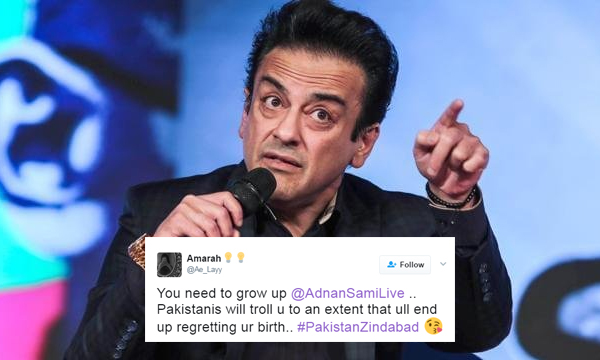 For those who have heard about Snapchat controversy brewing in India will know how the neighboring nation is reacting towards the whole fiasco. Now, Adnan Sami has voiced his opinion on the matter too. But little did he know, that it was just not his day!

The singer who has found a permanent abode across the border declared on Twitter that he has boycotted Snapchat for good. Of course, the Twitterati in Pakistan bashed him like nobody’s business and trolled him for supporting India!

Probably, Sami did not know what was coming for him!

In the fiasco of #snapchat & poor #india, #AdnanSami is trying hard to look relevant.
Someone give him a glass of “lassi” please.

Even Taher Shah has more fans than Adnan!

This guy literally won with his pun!

If life gives you Sami, try to be even Mohammad Sami but never be an Adnan Sami #Adnansami

Then Adnan Sami hit back at them by making his love for India all the more obvious!

Adding fuel to the fire, his bitter tweet echoed of anti-Pakistan sentiments!

This is not the first time the crooner has tweeted something against Pakistan! Time and again, his statements prove that his heart belongs to India and not to the soil he belongs!

Nevertheless, Twitter had a field day and mocked the living daylights out of Adnan Sami!

Adnan Sami Reveals Why He Ditched Pakistan Over India!