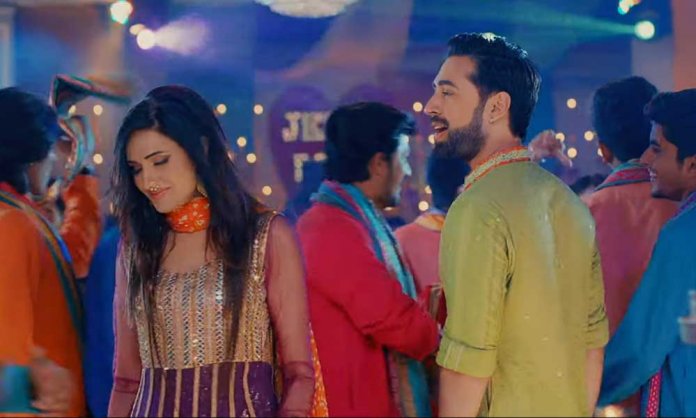 With three movies – Superstar, Heer Maan Jan and Parey Hut Love – releasing this Eid, we have a variety of dance tracks to choose from as well.

After releasing the trailer of Heer Maan Ja featuring Ali Rehman Khan and Hareem Farooq, the makers released the first song from their upcoming film which too, has become an instant hit.

Following the success of the blockbuster song ‘Billo Hai, IRK Films has collaborated with Sahara UK once again. ‘Addi Maar‘ has been sung by the very talented Herbie Sahara and Nindy Kaur while the fantastic music has been produced by Manj Musik.

Addi Maar features Ali Rehman Khan along with Zara Sheikh who has made a comeback through this song. The song is colorful, upbeat and full of energy. The beat is guaranteed to make you want to put your dancing shoes on and groove along.

Here’s what Social Media thinks about the song:

You cannot hate punjabi music. It has tarka of bhagra and dhool. This is simply amazing. #AddiMaar #HeerMaanJa pic.twitter.com/qGulwAw2Zu

#AddiMaar is one of the most fine songs of this year, I wish @alirehmankhan best of luck for his movie #HeerMaanJa pic.twitter.com/uDt1bepe4x

#AddiMaar. Pump up the volume 🔉🔊 on loop 🔥
This song is a celebratory mode. @alirehmankhan you're a beauty no one can resist💥! @FarooqHareem we glad to see both of you together!@HeerMaanJa #IRKfilms.

However, some said they would’ve liked to see Hareem dance along with Ali Rehman instead of Zara Sheikh.

Ali Rehman Khan dances so good in #AddiMaar but I don't know the reason to feature Zara Shiekh init. She is literally doing nothing, lol. I would have loved Hareem instead for that purpose. #HeerMaanJa

Combining a great mix of, dance, music, drama, romance, comedy and action, the film has all the ingredients to make a super hit masala film.

Other than Hareem Farooq and Ali Rehman, the cast includes Aamina Sheikh, Abid Ali, Ali Kazmi, Faizan Sheikh, and many others.

Heer Maan Ja is directed by Azfar Jafri and produced by IRK Films and Arif Lakhani Films in association with Geo Films.

What do you guys think about Ali Rehman and Zara Sheikh’s chemistry in the song? Comment and let us know.