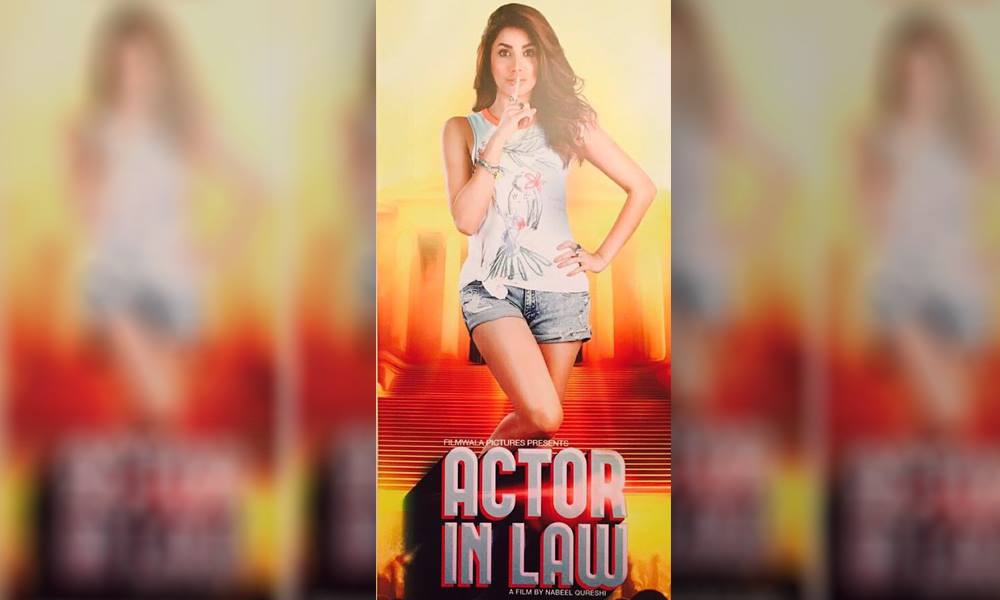 After Na Maloom Afraad’s successful run at the box office, director Nabeel Qureshi’s next cinematic venture,#Urdu1 #ActorInLaw is a much hyped and awaited Pakistani social-comedy flick. The first look of the movie #ActorinLaw is out and it looks exciting than ever!

By the looks of the poster, it seems Fahad plays a popular celebrity in the movie while Mehwish Hayat plays a fun loving journalist; Om Puri will be seen in the avatar of a grumpy lawyer. View the intriguing official poster of Actor In Law below: #Urdu1Pictures #Urdu1 #ActorInLaw

Mehwish Hayat revealed that the movie is “a social comedy” with “emotions, love and plenty of surprises.”

The movie trailer really does look promising and a must-watch experience. #ActorinLaw is expected to be a great entertaining flick, reaping just the amount of success Na-Maloom Afraad did.

Watch the official trailer below:

Among those who spoke on the occasion were Nina representing Urdu 1 Pictures, the producer Fizza Ali followed by the director Nabeel Qureshi. The film’s trailer was unveiled before a delighted audience after which Alyy Khan, Mehwish Hayat and Fahad Mustafa talked about their experiences on the sets, their characters and what it was like working with Om Puri.

View some of the BTS Shots of Actor In Law below:

Something big is coming to hit your screen soon 😉 #TVC

#MehwishHayat all dolled up for #ActorinLaw trailer releasing today by Team #NPRO #NABILA. Wardrobe by #NomiAnsari

A post shared by PAKISTANI CELEBRITIES🇵🇰 (@pakistani.celebrities) on Jul 14, 2016 at 8:09am PDT

The cast and crew of the upcoming movie Actor-In-Law met the media at a local five star hotel, for its trailer launch.

View some pictures from the trailer launch event of Actor in Law below studded with stars such as Humayun Saeed, Mahira Khan and lead actors Fahad Mustafa and Mehwish Hayat.

Mahira Khan wishes the readers and followers of Something Haute lots of luck and wishes! Got to love her… (Psst…love the silver on her fingers too!) classic beauty #happeningnow #actorinlaw #trending #mahirakhan

A post shared by PAKISTANI CELEBRITIES🇵🇰 (@pakistani.celebrities) on Jun 28, 2016 at 7:25am PDT

We surely were looking forward to the movie trailer slated to release on 28th of June, 2016.

#Urdu1Pictures #ActorInLaw is all set to release on Eid ul Azha, clashing with ARY Film’s Janaan at the box office.

The film also stars the veteran Bollywood actor Om Puri who Nabeel Qureshi has promised will be in Pakistan during promotions of the movie: “Om Puri will be in the country for the premiere, as well as promotions.”

The upcoming movie, #Urdu1Pictures #ActorInLaw has brought back  the stellar cast of Na Maloom Afraad, featuring Fahad Mustafa and Mehwish Hayat, with the Indian actor making a mark in Pakistan, Aly Khan, the movie is expected to be a major hit. When questioned about the movie’s plot, Qureshi said:

“I’m always evasive about my scripts, it’s just my style of working. I don’t like to talk about things in progress. I will say that it’s a social comedy with a very interesting story line. There’s many aspects a lot of people will be able to relate to.”

FilmWala Pictures and #Urdu1Pictures have collaborated for Pakistani movie Actor in Law, which will be their debut project. The movie has been produced by Fizza Ali and directed by Nabeel Qureshi of Na Maloom Afraad fame.

Rumor has it, Mahira Khan had been roped in to play the lead in this project – however, it seems that the Ho Mann Jahaan actress dropped out and Mehwish Hayat is now playing the lead role.