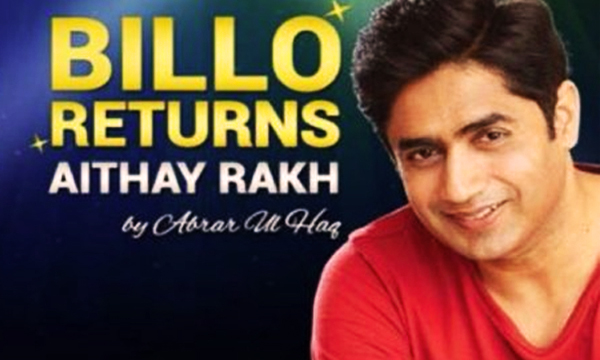 The Punjabi sensation Abrar Ul Haq, who has reigned the Pakistani Punjabi bhangra scene, giving us hits like Preeto, Nach Punjaban and Billo De Ghar has released yet another song for Billo fans, titled ‘Aaj Bhi Billo Zinda Hai’ making waves across the music industry and pleasing his fans. The singer has launched his much-awaited album in a ceremony at Lahore on Saturday. His latest album features a song titled Aaj Bhi Billo Zinda Hai, mainly for his Billo fans. “Billo was such an iconic song that it had to be resurrected in some form or the other,” Abrar said.

Listen to the song Aaj Bhi Billo Zainda Hai below:

Abrar’s recent album is different than the rest of his albums and has a lot to offer to his fans.

“My songs are my identity and I am proud of the fact that they reflect my love for my country,” says Abrar. “Pakistan has a rich culture but it is indeed a tragedy to see other languages slowly replace our own. There is a strong influence of Hindi on our people — I’ve come across common people frequently using Hindi words in their conversation without realizing it,” says Abrar.