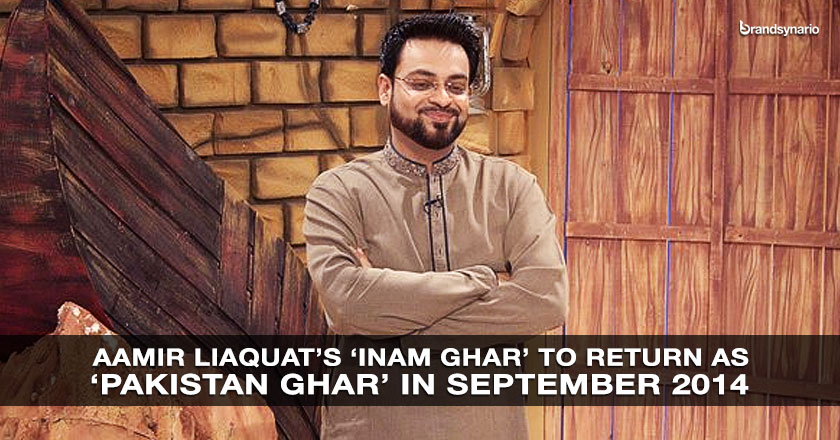 ‘And he is going to find you and continue to feed you aam (mangoes) till you drown in national embarrassment and lunacy.’

Yes, just like a wounded tiger, Dr. Aamir Liaquat Hussain is going to make a comeback and reclaim his throne with another grand prize quiz show for Express Channel from September 2014.

While concluding his Ramadan Transmission ‘Pakistan Ramadan’, Mr. Liaquat boldly announced the launch of his prize winning show which, according to rumors will be named ‘Pakistan Ghar’.

However, there are decent chances that the show could be named ‘Inaam Ghar’ as the rights of the previous show belong to Aamir Liaquat.

Based on the same theme of giving away branded prizes worth millions of Rupees, the show is being launched with the purpose of beating Fahad Mustafa’s ‘Jeeto Pakistan’ being aired on ARY Digital.

If rumors turn true, the show will be aired every Friday and Sunday live at 9 pm.

Let’s get ready to see a lot of ‘firdous ki lawn’ and ‘Qmobile’ once again. If things stay the same as ‘Inaam Ghar’, the following registration process will be followed:

From your cell phone open, ‘Messages’ and click on the ‘Create Message’ option.

– The Message will be charged at Rs.5+TAX

Here is to another season of Tukka Lagao Raho Musalmano (Keep Guessing Muslims)!

Disclaimer: The views expressed are those of the author and do not reflect the official policy or position of Brandsynario