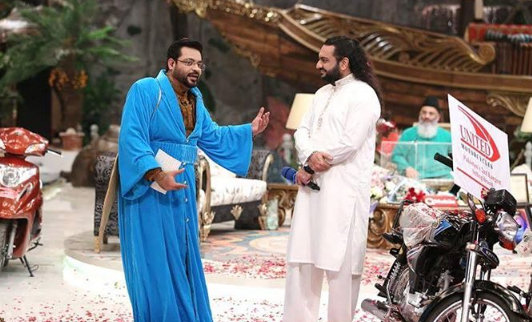 Aamir Liaquat never, ever fails to surprise us! Last night on Geo, he shocked everyone by apologizing to the social media sensation Tahir Shah live on his Inaam Ghar show! What’s more, he donned the iconic blue robe from the singer’s viral song “Angel”.

Back in 2014, soon after Eye to Eye became a one hit wonder on social media, the popular televangelist invited the singer on his Ramadan transmission and mocked him terribly.

Shah had even took to Facebook describing how humiliated he felt. Seems like it took Liaquat two long years to finally make up to Tahir Shah for his behavior. This time in his show, the entertainer gave a warm welcome to the star and even showered him with roses.

Not only Aamir bhai applauded his guest for making Pakistan proud with his Eye to Eye and Angel tunes, he also praised him for spreading smiles and bringing real happiness to people with his viral videos

Ohhhh my gosh…. is anyone watching #AmirLiaqat…. performing on #Mankind‘sAngel in a Ramazan Transmission
What the hell?????

#AmirLiaqat pulled off a Taher Shah rendition of “Angel” on LIVE TV?
Please tell me that did not just happen… 😐#BlessingsOfRamadan

Some became immediate fans of Liaquat.

Aamir liaqat stopped giving respeCt to people.Tahir Shah was respectably called at his show but got trolled out of now where.

Others thought he was up to something selfish!

#AmirLiaqat really a great “over actor”

I can bet that if Tahir Shah makes a movie , that movie is going to break all the records in Pakistan. Would be a massive hit.

After Angel…. Tahir Shah is again ready to rule the social media.. Lol

What do you think about Aamir Liaquat’s apology to Tahir Shah? Share your views in the comments below.