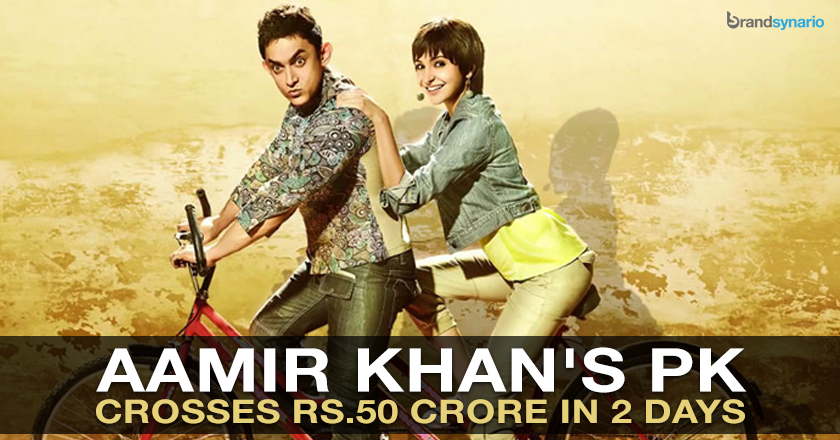 With Rajkumar Hirani making blockbusters one after another and Aamir Khan’s obsession with perfection, the anticipation for their latest release together, PK, was sky high. The movie released at a record 4,844 screens globally and while, it received five star reviews, it also generated criticism from the religious segments of India.

PK made INR 26.63 crores on its opening day and was expected to make INR 91 crores by the end of Sunday, breaking Salman Khan starrer Kick’s records. While the movie had garnered a lot of attention even before its release, it failed to beat the records of Happy New Year and Dhoom 3.

PK is a story about an alien, played by Aamir Khan, and a journalist, played by Anushka Sharma, condemning god men. According to Wikipedia, a godman is an Indian term used to describe a charismatic guru supposed to possess extraordinary powers and are usually viewed in a derogatory manner. After the legendary ‘All is Well’, Aamir Khan has now given the public new catchphrases: ‘Wrong number’, ‘Jo Darr gaya wo Mandir gaya’ and ‘Hum confusiya gaye hain’.

Rajkumar Hirani has once again weaved his magic through his directorial brilliance and Aamir Khan with his flawless performance has highlighted a critical social message through humor. Anushka Sharma’s performance as Jaggu and Sanjay Dutt’s acting in the small cameo role is quite commendable too.

The movie’s story sparked criticism by Hindus and the public resorted to Twitter with the hashtag #BoycottPK as a protest. The protest was met by hashtag #WeSupportPK in response by those who defended the movie.

Watched the screening of PK. An outstanding film!!! Aamir khan is an institute. Simply loved him. Bigger fan of Rajkumar Hirani after this.

PK is hilarious and emotional in equal measure…it’s a game changing film….Kudos to the team!!! @AnushkaSharma you were superb!!!

PK yet again proves that Rajkumar Hirani is the best director of our country…it’s undoubtedly Aamir Khans best performance to date….#PK

No one but @aamir_khan could have done pk !!you made me cry and laugh out aloud innumerable times. Anything that I say is less..

#PK could not have been better timed.This film i hope redefines the ‘MINDSCAPE’ of #India. @RajkumarHirani @AnushkaSharma @aamir_khan ??????