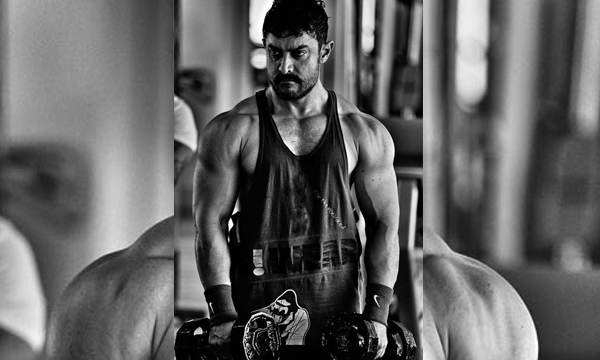 Remember Amir Khan’s Aati Ka Khandala tune? Seem like Mr. Perfectionist will yet again be taking the place behind the microphone, this time as a rapper for his upcoming movie Dangal!

The melody for Khan’s wrestling drama has been composed by Pritam and lyrics are penned by Amitabh Bhattacharya. For his debut as a rapper, the star has been training for two weeks and has also been rehearsing with Amitabh and Pritam to make sure his tune is pitch-perfect!

Apart from Aati Kya Khandala in Ghulam, Khan has devoted his voice to Iss Deewaane Ladke Ko from Sarfarosh and Mere Haath Mein from Fanaa. Let’s see a different side of his vocals as he raps in Dangal.

We all know that Amir Khan is the Mr. Perfectionist of Bollywood. Recently taking to Twitter, Aamir Khan unveiled his beefed-up look for the movie. Donning a black sports vest with dumbbells in both hands, Aamir Khan reflects a menacing avatar.

Be it the role of Bhuvan in Lagaan, PK or Mangal Pandey, he has truly proved his talent and versatility. Aamir is yet again all set to display his wrestler avatar in Dangal. Aamir Khan is undergoing a tough exercise and diet regime to attain that perfect avatar as Mahavir.

As we all know, the perfectionist of Bollywood, Aamir Khan is immensely busy with this Bollywood movie Dangal. The actor has shown a drastic transformation in terms of looks to play the wrestler in the movie.

The actor gained weight for one-half of the movie and lost weight for the other half, this is commendable in itself! Check out Amir’s drastic transformation after losing almost 23 kgs for the role! Only Amir can do this. While speaking about his role Amir said; “For Dangal I had gone up to 95 kgs. I am done shooting for that portion and have lost quite a lot weight. I am now weighing 72 kgs. My aim is the Ghajini look. It was difficult to lose weight but I have exercised 6-7 hours daily to get into this shape”.

The movie is slated to release this Christmas.