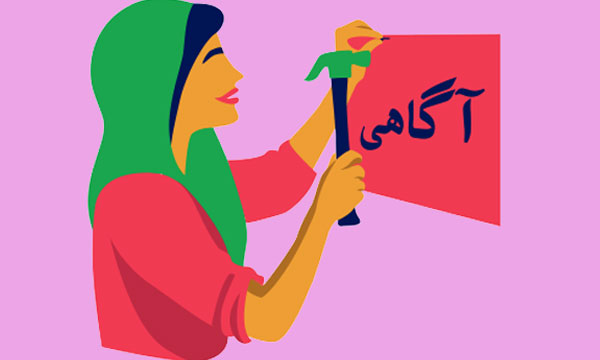 AAGAHI, which means awareness, aims to educate women about their rights in Pakistan.

Over the course of the next twelve months, SOC Films will release a series of videos in Urdu and other regional languages explaining and clarifying the legislations which affect women; and giving an overview of how the legal provisions granted to them may be applied.

Through the series of these short informative videos, several questions often raised would be answered such as; how to file an FIR, what does the law state on instances of rape, sexual harassment, divorce and inheritance and what is the procedure for reporting issues like these and who should be approached for help.

“I have travelled the length and breadth of Pakistan and one thing that has always struck me is that we women know very little about the rights that we have in this country. We have little understanding of the court system and how to navigate it and we aren’t always aware of the ways we can protect ourselves. This is why SOC Films has collaborated with Women’s Action Forum and undertaken the project “AAGAHI” through a series of videos, which we aim to disseminate for free, across Pakistan, we hope to educate women about their rights and how they can assert them.”- Sharmeen Obaid-Chinoy

In collaboration with Women’s Action Forum, each short-film has been conceptualized, produced and directed by SOC Films and will be between 2 to 3 minutes long and will cover the law, its interpretation and the safety that it provides to the victim.

This will also include the legislation, as stated in the Pakistan Penal Code, and the various case laws, which have been passed or revised in the recent years.

“Violence and abuse of women in Pakistan is a very serious issue, affecting more than 50 per cent of Pakistani women. For many years, countless people including Women’s Action Forum members, have struggled for women’s right to justice and equality and for an end to cruelty, violence and abuse of women. Now, with democratic governance and input from parliamentarians we have achieved some success. But far more effort is required to ensure equality and justice for women, and freedom from violence and abuse. The first step is to increase public awareness of women’s rights, as equal citizens of Pakistan. These short documentaries are very informative. They will help us all to understand the urgent need to eliminate violence against women, so that women can achieve their human rights and play a strong role as dignified equal citizens of this country.” – Women’s Action Forum

One of Pakistan’s leading actresses, Aamina Sheikh has lent her voice for the series, which will be shared free of cost with all the news and media channels for dissemination across the country.

“AAGAHI i.e. ‘Awareness’ is the only way for an individual to seek knowledge and to gain empowerment. The power to steer one’s life in the direction that they deem apt for themselves is through awareness (AAGAHI). The need for this is most pertinent in our society and the effort of bringing the knowledge and understanding of the law to the common woman and man is most needed in our culture. Therefore, i found it significant and imperative for me to lend my voice to the project that aims to reach those in need. I wish the team the very best and hope that ‘AAGAHI’ reaches all those in need and that they are able to use the information to their advantage for the betterment of their lives.” – Aamina Sheikh.

The short films cover several different issues, including but not limited to ‘Marriage & Family’ [forced marriage, divorce rights of women, rights to inheritance and domestic violence]; ‘Protection from Crimes’ [procedural rights: how to file an FIR, honour crimes, rape, sexual harassment, acid crimes and cyber-crimes] and ‘Rights at the Workplace’ [sexual harassment at workplaces and working women and their rights].