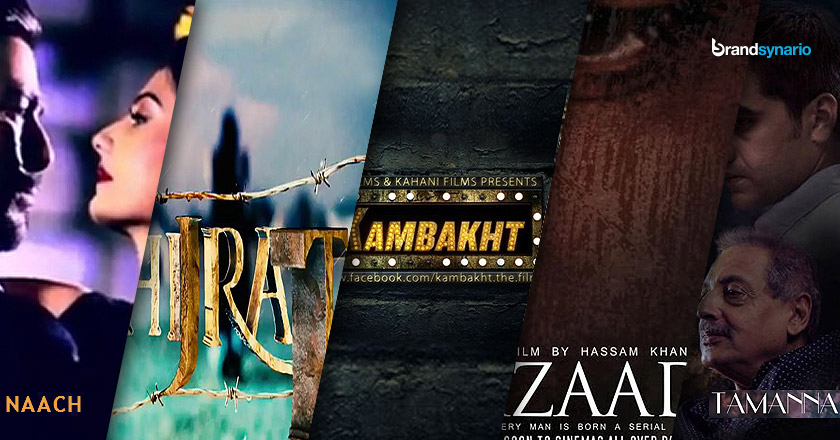 Soaring high and proud, Pakistani cinema is currently on the road of success with its glorious revitalization.

The nation is still rejoicing the success of last year’s back-to-back hits and is now anticipating even better quality movies and worth watching entertainment.

A rising wave of emerging movies including Waar 2, Operation 021, Jaliabee , Delta Echo Foxtrot and Moor is all set to hit the cinema industry this year.

But this revolutionary list surely doesn’t end here. Some seemingly noteworthy and ground breaking projects have joined the journey of this cinematic revival and are gearing up to work their magic on the Silver Screen.

Once again, let us provide you with a glimpse of some amazing movies to watch out for in 2014.

Pakistan’s first ever movie based on dance, “Naach” will indeed expand horizons of the cinema industry, for never a Lollywood film has explored performing arts in the country.

Featuring superstars Shaan Shahid and Javed Sheikh, the film will groove its way to the silver screen in the second quarter of the year.

Yet another heavy budgeted movie, Hijrat is a romantic story that revolves around the heartbreaking tale of the homeless and the unsheltered who suffered in the Afghan war. The date of its release is still unknown.

Yet another one of its kind movie, the psychological thriller “Azaad” is about to arrive in the Pakistani cinema’s by June this year.

The movie is based on real life events of a serial killer and is bound to leave the audience in goose-bumps.

Incorporating a blend of passion, revenge, drama and dark humor, the movie will be released in Pakistan by Summit Entertainment on 23rd March.

Brace yourself as the year even marks the release of Pakistan’s first ever horror comedy movie. With its storyline revolving around zombies, The Walking Dead will open a new chapter in the history of Pakistani cinema and will surely join the ranks of the top movies of the year.

Inspired by the cases of missing people in Pakistan, The Dusk storyline openly addresses the terror that has gripped the nation.

Apparently quite controversial in nature, its release date has not been announced yet. However, rumors are that it will hit the box office in the upcoming months without further ado.

A biographical movie based on the life of the legendary Political Personality and Cricket Champ Imran Khan, has already created uproar in the industry with the release of its trailer last year.

Kaptaan’s release was pretty delayed already due to a lot of issues and is now expected to be rolled in cinemas sometime this year.

Written and directed by Hamza Abbassi only, the film will hit the box office in mid 2014.