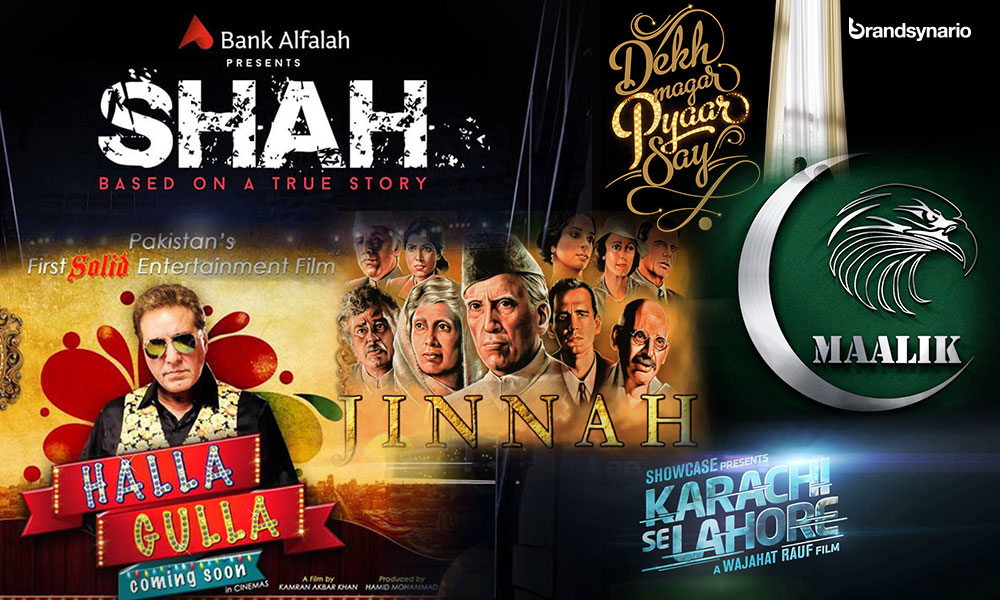 Brace yourself movie-buffs; for a fabulous film fest, jam-packed with entertainment is coming your way! Dawning with the month of August is a grand extravaganza of local movies, raising the curtains of silver screens all over Pakistan.

Eight local films will hit the cinemas back-to-back, with half of them competing for a clash on 14th August. Meanwhile, our very own chocolate hunk, Imran Abbas, will be vying for victory over the box office with B-town’s Jaanisaar.

Check the complete list of movies below that are lined up for August 2015.

The month is opening with a heady dose of masala and romance, paired with laughs and a steamy item number! The cast, which includes Ayesha Omer, Shehzad Sheikh, Javed Sheikh, Rasheed Naz, Eshita Syed, Mantaha Maqsood, Yasir Hussain and Ahmed Ali will be travelling all the way to the theaters in Pakistan’s groundbreaking road trip feature film “Karachi Se Lahore”.

Watch the trailer of Karachi Se Lahore below:

Starting the Independence Day spree of movies is Humaima Malik along with Sikandar Rizvi, kindling their magic on the big screen with Dekh Magar Pyar Sey. Like Karachi Sey Lahore, the Asadul Haq’s directorial debut too is a high budgeted rom-com set in Lahore.

Watch the trailer of Dekh Magar Pyar Say below:

With its release in pending since last two years, Moor’s launch in the cinemas will now face a mighty battle with Dekh Magar Pyar Sey, Maalik, SHAH and Jinnah on August 14th. All set to expose the corruption that has gripped Balochistan’s railway system, the movie tells a heartbreaking real-life story of an ill-fated Pakistani family.

Watch the trailer of Moor here.

Featured on the life of the legendary Pakistani boxer and an Olympic medalist- Syed Hussain Shah, Pakistan’s revolutionary sports movie SHAH is all set to punch its other cinematic rivals. While the movie’s promo rolled out this month, received a warm welcome by the audience; let’s see if the cinema-goers will ditch the rest of the cinematic line-up and book their seats for watching SHAH on the release day!

Watch the trailer of SHAH below:

A mighty blockbuster of 1998, there could not have been a better time for the Christopher Lee starrer to re-release in the industry this Independence Day. Nevertheless, it’s too early to tell if the re-launch of the tale of partition and its leaders will be as successful as it is anticipated

Watch the trailer of Jinnah here:

Further heating up the competition, marches Maalik to fuel up your feelings of patriotism on August 14th. With its tale revolving around the lives of powerful men belonging to Pakistan’s Elite Special Forces, Maalik will unravel how their lives get entwined in the clutches of corruption.

Watch the trailer of Maalik below:

After a break of nine days with the bumper-to-bumper release of movies, the cinemas will open doors for the comedy Halla Gulla on August 28th.

Peppered with a high drama dose and spiced with a filmy flavor, the movie stars veteran actor Jawed Shaikh and legendary comedian, Ismail Tara. As per the trend, there will be an item number “Ishq Kamla” in the movie to watch out for!

Watch the trailer of Halla Gulla below:

The month of nonstop movie release will end with the Lollywood lady – Resham’s comeback film Swaarangi. Also, slated to be released on 28th August, the movie will be a reality-based heart breaker that has been developed to expose the how the vile issue of poverty and drug addiction destroys homes and tears families apart.

Watch the trailer of Swaarangi below:

With 5 out 8 local movies heading for a 14th August release, the month will experience a fiery war of entertainment over the box-office that will be worth a watch!

Amidst the high-flying local competition, Jaanisaar will enter in the game with the Pakistani heartthrob Imran Abbass and Indian fashionista, Pernia Qureshi. Hitting the screens on August 7th, the movie with its 1980’s romance tale will be different from any of other films releasing in August. But will it be able to conquer the cinemas and put the pile powerful Pakistani projects out of business? Let’s wait and watch!

Watch the trailer of Jaanisaar below:

Which movie will you be rooting for this Independence Day? Let us know in the comments below.