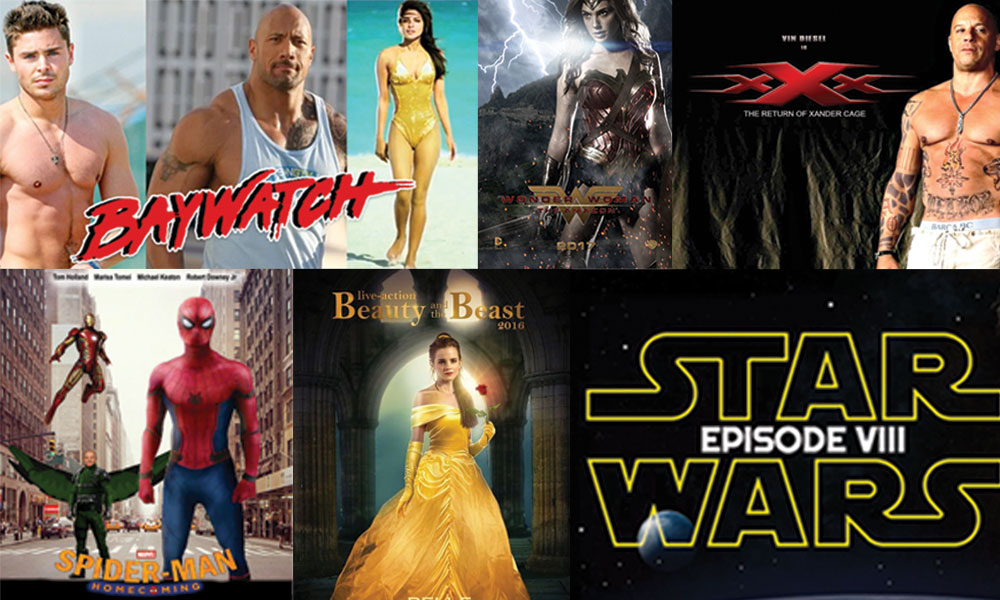 With 2016 in full swing, we all know what movies we’re marking our calendars for and planning trips to the cinema with friends already. But what does 2017 have in store for us? While an insane number of movies are released year after year, here we cover some of the must watch movies that are already marked on our calendars.

After the resounding success of Star Wars: The Force Awakens, the seventh installment in a series of much loved movies spanning the decades, it is no surprise that the filming of the eighth installment is in full swing. Star Wars: Episode VIII is the second part of the Star Wars reboot, written and directed by Rian Johnson. The stars of the previous film will reprise their roles, with Daisy Ridley, John Boyega, and Oscar Isaac the heroes of the newer generation, with Mark Hamill and Carrie Fisher returning as older versions of their characters from the 1970s Star Wars trilogy.

Other actors involved in the project are Adam Driver as the villain Kylo Ren, Domnhall Gleeson, Lupita Nyong’o, Gwendoline Christie, and Benicio del Toro. The movie is scheduled for a released on 15th December, 2017. 2. Beauty and the Beast

Fans of the Disney classics will find themselves in for a treat in 2017, with a live action remake of the tale of Beauty and the Beast, and that too starring Ema Watson of Harry Potter movies fame.

The movie follows the 1991 film animated adaptation, and while it promises to follow the original tale of Belle and the beast, little else is known about the movie, despite a teaser trailer release.

Not much is known about the movie as of now regarding the third reboot of Spiderman, but after the overwhelmingly positive response Spiderman received in Captain America: Civil War, one thing is for sure that the expectations are totally high.

Tom Holland was completely on point in his performance as Spidey, and it’s expected that he will reflect the same talent in Homecoming. As of now Tom Holland and Marisa Tomei, who played Aunt May in Captain America: Civil War, are confirmed to be in the movie. Rumours are circulating about an Iron Man appearance in the movie, as well as Michael Keaton being signed on to play a villain. The movie is currently set for a release on 7th July, 2017.

A lot of remakes and reboots seem to be cropping up in 2017, with a film based on the 1980s show Baywatch in the works with a newer, younger cast. Directed by Seth Gordon, the title will be the same as the series, and will star Zac Efron, Dwayne Johnson and Alexandra Daddario in prominent roles.

One exciting factor is that this movie will be the stunning Priyanka Chopra’s Hollywood movie debut, after her work in the Hollywood television series Quantico.

The movie will be following the same theme as the show, taking place on a beach, centered around the lives of the attractive lifeguards that frolic attractively along the shore.

The movie will see the return of Pamela Anderson and David Hasselhoff to Baywatch, who were prominent cast members back in the show’s heyday. The film is scheduled to be released on 19th May, 2017.

After her amazing performance in Batman vs Superman, we can’t wait for Wonder Woman to shine in her very own movie. And that’s exactly what we’re getting in 2017, starring Gal Gadot and Chris Pine.

The film is directed by Patty Jenkins, and will also star Lucy Davis, Connie Nielsen, Robin Wright, and David Thewlis among others. Wonder Woman is slated for a 2nd June, 2017 release.

Xander Cage, the extreme sports athlete turned government agent, returns back to the world of the living in this sequel. Previously thought to be dead, he resurfaces only to plunge straight back into a race against a deadly warrior in order to procure a deadly weapon. The movie features Vin Diesel as the main character, and will see Deepika Padukone in her Hollywood debut. Other cast members include Samuel L. Jackson, Donnie Yen, Nina Dobrev, and Tony Jaa. The movie will be released early on in 2017, on 20th January.