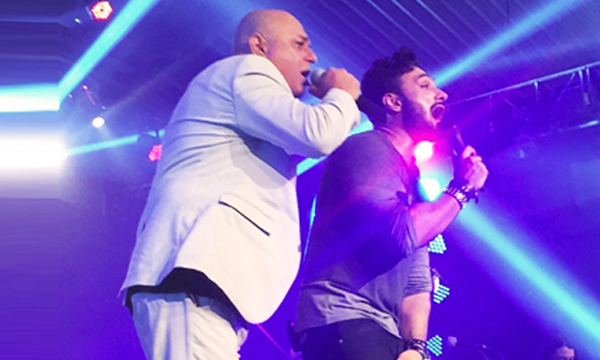 On Saturday 27th August, the city of Karachi witnessed one of the most hyped and anticipated rock concerts, featuring the legendary singer, Ali Azmat and the very talented and energetic, Umair Jaswal. The ultimate #clashofgenerations was much hyped, owed to the pre-event leaked videos that managed to grab the attention of every rock music enthusiast in Karachi.

From the Ahmed Ali Butt’s astounding hosting skills to Ali Azmat performing with Mekaal Hassan on stage, the ultimate celebration of music made the event a major hit!

Here are some of the most memorable moments from the rocking night:

The night started off with Hira Tareen hosting the blue carpet! The dusky beauty stunned in an all-black attire, rocking a cowboy hat.

The girl managed to create quite the pre-event hype by asking every celebrity who they are supporting. She was even the DJ for the night!

Check out Ali Azmat and Ahmed Ali Butt in a friendly tussle:

Ahmed Ali Butt was the host of the evening!  The grand soundclash was segmented into four rounds with artists and legendary musicians like Faraz Anwar, Mekaal Hassan, Gumby and Omran Shafique.

The event opened with DJ Faisal Baig and his electro music leading to an ultimate clash between the two drummers, Ahad Nayani (Umair Jaswal’s side) and Gumby (Ali Azmat’s side).

Ali and Umair then took their respective stages and sung some of their most popular numbers.

Ali Azmat’s collaboration with Mekaal Hassan was an ultimate treat for the ears! It swooned the audiences, who fell in love with the iconic singer all over again.

Umair Jaswal and his amazing rockstar energy put the stage on fire! Ali Azmat no doubt did have an edge over the young rockstar with most of the crowd members cheering for him but when Umair started singing the Coke Studio song Sammi Meri Waar, the scales tipped in his favour and the audiences just couldn’t help themselves but sing and dance along!

It was a total crowd pleaser! The singer can definitely sing live and sure knows how to pump up the audience.

The night was studded with many popular names from the entertainment fraternity who attended to pump up the energy and encourage both the mega-giants of the music industry.

6. Truce at the End: An Ultimate Celebration of Music

The best part about the show was when, to everyone’s surprise Ali Azmat called Umair Jaswal on his stage and gave him a big hug. The message that they both conveyed was that of an ultimate victory of music rather than the artists. The two then performed Jazba-e- Junoon on stage together with full ‘Jazba’ giving the audiences just what they needed by the end of the night.