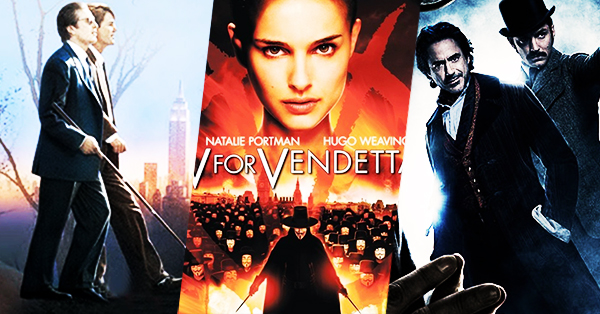 There are some movies we watch that truly inspire us, leaving a long-term impact and totally changing the way we perceive life! The meaning of good cinema is truly showcased by some of the phenomenal Hollywood movies that intrigue us, enlighten us, and leave us with a gust of emotions.

Here is a list of such phenomenal movies that are truly inspirational- I bet you’ll look at a life with a totally renewed outlook after watching these.

Not intended for the commercial movie fan, but a fantastic cinema experience! The concept and narrative of the masked caped crusader has rarely been foretold in the suspense/thriller genre. The dialogue and the screenplay are to die for. Hugo Weaving (The Matrix) and Natalie Portman (The Black Swan) have a chemistry, which is both dark and mysterious combined. They are in love, but the viewer is left to stretch their imagination.

Hugo Weaving (The Matrix) and Natalie Portman (The Black Swan) have a chemistry, which is both dark and mysterious combined. They are in love, but the viewer is left to stretch their imagination. The action is old school, a combination of knife battles, postmodern karate, and Chic Street fighting. The movie truly left me spellbound and instilled a false sense of patriotism in me, that what can be dreamt can be achieved.

What does one say about Alfonso Pacino, commonly Al Pacino. Though the current generation will not have experienced his great work, which is aplenty with movies, particularly his roles ranging from Tony Montana in Scarface, Michael Corleone from The Godfather, Carlito Bragante from Carlitos Way and Jimmy Boy from Donnie Brasco, well forget about it, no pun intended. Al Pacino’s portrayal as a blind, retired Col Slade is unmatched. How he resurrects a young student’s life albeit learning more from the Chris Odonells character.

The school ballroom scene is one of the best dialogue deliveries I have seen. One cannot forget the hot stepping tango Col. Slade does in the middle of the movie. We are fortunate and blessed to have eyes, but this depiction showed how cool it would be to be blind. The movie shows you intricately about character and respect and how one goes about achieving this with hardships all around. One must have a look at this and keep it for a rainy day. Always.

There always comes a time when you see a movie and you think to yourself, “this I got to tell my grandchildren about.” The Usual Suspects is one of those. Not normally considered to be commercially rated or loaded with huge stars, it launched some of the biggest actors nowadays, Mr. Kevin Spacey and Mr. Benecio Del Toro. Remember Kaante, the bollywood flick starring Amitabh Bachchan, it was a complete rip-off of the classic original. The screenplay is superb, without any special effects, animations or the usual jazz going around nowadays, this movie creates a world of its own. The opening scene, the closing scene, it’s the classic who dunnit?

Spacey as the limping Verbal Kent and now known to be Kaizer Sozay, is a genius, this movie is a legendary status in my opinion. Crime story buffs, please have a watch.

4. Sherlock Holmes : The Game of Shadows

Sherlock Holmes is now played by an American. That’s something interesting! One never thought of Holmes being portrayed as he was by Robert Downey Jnr in the recent adaptations. This is one of the best movies I have ever seen and the bond between Dr. Watson (Jude Law) and Downey as Holmes is

This is one of the best movies I have ever seen and the bond between Dr. Watson (Jude Law) and Downey as Holmes is tremendously rivetting stuff. Downey expresses his brilliance and intelligence from his version. The tactics and plot are excellent while the screenplay and costume design is totally cool – the supporting cast is truly the best ever. The actors kept their distance from the proverbial cliches, but I may tell you, the games afoot in this flick. Just for the script and adventure, young and old can have a sit-down and watch the masterpiece unfold.

Just for the script and adventure, young and old can have a sit-down and watch the masterpiece unfold.

Not a single hint of vulgarity or profanity going around here. It is a must-watch, guys!

Closest and darkest depiction of the investment banking world, The International is an investigative drama feature par excellence. The beautiful and talented Naomi Watts adds her touches to this one and it is well supported by the always consistent Clive Owen.

Gripping suspense and a plot so ingeniously written left me wanting to know more. There is not a dull moment in this movie! Banking best explained to a non-banking background,the movie is a combination of classic /old school and chic modern day, the action is believable, the relationships understandable and the dialogue crisp and riveting. A second watch , yes, please!!!