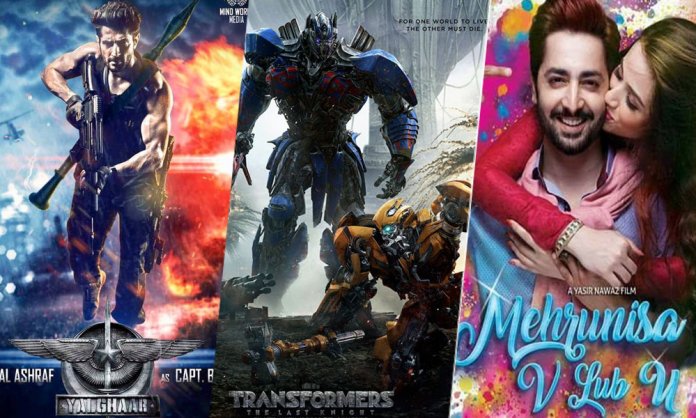 2017 will be packed with a lot of upcoming Pakistani movies, and many of them look like potential blockbusters. This year we are expecting movies from big celebrities like Mahira Khan, Yasir Nawaz, Shaan Shahid, Ali Azmat, Bilal Ashraf and Urwa Hocane. While Eid-ul-Fitr 2017 is still a couple of days away, Pakistani movies are gearing up for a blockbuster release on Meethi Eid!

However, giving them tough competition will be various Hollywood movies. Bollywood movie, Tubelight will be releasing on Eid ul Fitr 2017 around the world but is not scheduled to be showcased in Pakistani cinemas.

Eid is expected to be on the 26th June and here is the list all the movies that you can look forward to on the big day.

Danish Taimoor seems to be too busy these days as he is promoting his movie. For this one, he will be the lead in Yasir Nawaz’s upcoming venture alongside the beautiful actress Sana Javed. Nawaz will also be producing the film alongside Hassan Zia and Nida Yasir. The script is written by  Saqib Sameer and apart from the lead couple, the cast includes Javed Sheikh and Saqib Sameer.

The multi-starrer epic war saga is expected to hit the theatre’s this Eid. With Shaan as its protagonist, we sure do expect a movie worth a watch.

The latest instalment in the Despicable Me series is releasing on the 3rd-day of Eid ul-Fitr, 28th of June 2017.
It is the only animated movie to be released in Pakistan this Eid. We can’t wait to watch what adventure the adorable minions take us on next.

We can’t believe it’s finally time to experience the last chapter from the Transformer series. This will be marking the end of an era. It would be your last time watching Bumblebee on the silver screens! For transformer fans, this movie has to be on your must watch!

5) Pirates of The Carribean: Dead Men Tell No Tales

Johnny Depp is seen reprising his role again for yet another instalment in the Pirates of the Carribean series. The Pirates are back with a bang with this one!

What will you be spending Eid-ul-Fitr 2017? Let us know in the comments below.