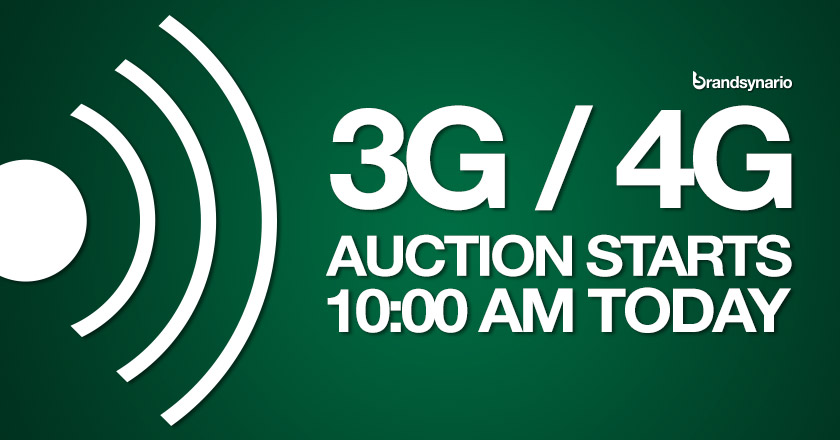 Pakistan’s technology sector is all set to witness the history as PTA gears up to conduct the much awaited 34/4G spectrum auction today, 23rd April 2014 at 10:00 am.

According to the official statement from PTA, the auction process will start at 8am as each qualified bidder will be allowed to log into the auction system.

Few important pointers for the 34/4G Auction day are:

1. 3G / 4G spectrum auction will be held electronically, i.e. bidders will be bidding online through internet.

2. All qualified bidders will participate from head-offices in Islamabad in the presence of their board of directors.

3. To keep the operator’s bid private, all bids will be color-coded with each bidder having a particular color. PTA said that this confidentiality is aimed at boosting the competition in the auction.

4. Each bid will have a time interval or 45 minutes and operators will have to beat previous highest bid with-in the allotted time.

5. PTA said that minimum bid should be at least 3% higher than the previous highest bid; however, this rate (or 3%) will be lowered towards the end of auction.

6. License to the successful bidders will be issued for 15 years.

7. The bid for 3G/4G license will take simultaneously with the help of Simultaneous Multiple Round Ascending Auction (SMRA) mechanism.

The complete auction process will be comprised of multiple rounds of bidding. The duration of each round will be at least 45 minutes or more.  The final results will be announced after each round on the PTA website (www.pta.gov.pk).

The auction will take place using an electronic system, which will allow the bidders to participate in the auction. PTA has chosen the Simultaneous Multiple Round Ascending (SMRA) Auction mechanism.

Along with faster internet connectivity and better technological infrastructure, the auction is expected to bring investments worth $1.3 billion to Pakistan.

Ismail Shah, Chairman PTA said,  “Based on the received sealed bid on April 14, it is now clear that the received demand is greater than the supply; therefore, the final auction will be conducted on April 23 (today), as planned,” PTA Chairman Ismail Shah said earlier.”

He added that the auction of 3G and 4G spectrum would be a historical event in Pakistan’s telecom history, as it would help raise the GDP growth by

“The scheduled auction of 3G and 4G licences would be held with the help of Simultaneous Multiple Round Ascending Auction (SMRA) mechanism only to ensure secrecy and transparency in the sale,” a senior official at the PTA said.

Mobilink, Telenor, Ufone and Zong are the four qualified operators for the 3G Auction. Warid is the only teleco that is left out from the bidding. Out of the qualified bidders, only two telcos will win the bid for 4G.

11:30 am: All telecommunication companies are connected through video conferencing.

11:00 am: The auction event is all set to begin at 11:00 am according to the following itinerary shared by ProPakistani.

According to PTA, the first bid has been submitted on schedule and the results will be revealed in a few minutes.