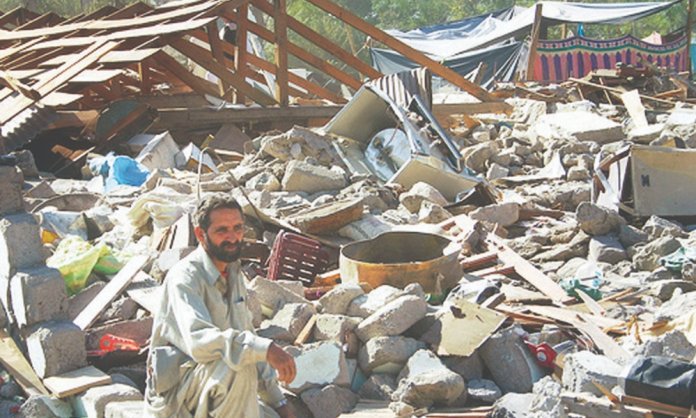 Mother Nature is a powerful force. She can turn the dynamics of the Earth’s geography upside down. Many have tried to conquer this force but they have been unable to. So what exactly does she bring with her? Of course, we can mention how beautiful nature is and there is no doubt about the magnitude of the beauty. However, Mother Nature does harbour powers that are beyond the control of any human being.

These are known as natural disasters. One such example is earthquakes. Earthquakes have the ability to bring about a form of destruction not comprehensible to humans. They are often left baffled with what an earthquake is capable of. In light of the terrible natural disaster that shook the nation fifteen years ago, we will take a look at some other devastating Earthquakes in Pakistan’s history.

During the second half of 2013, around September, a series of earthquakes came raging towards the country. They came from the depth of the planet and caused nothing but destruction. The first earthquake, also known as the mainshock, came at a staggering magnitude of 7.7.

This is an extremely dangerous level and if the earthquake itself was any shallower than it was (fifteen kilometers), the destruction would have been more catastrophic. Despite the depth, it still turned out to be quite disastrous and the death toll was registered at 825, at least. It injured hundreds of others.

80% of homes in the Awaran district were destroyed in this event. The government estimated the destruction of houses at 21,000. The earthquake was so huge that it was also felt in other regions of Pakistan, like Karachi, Hyderabad. It was even felt in parts of India like Delhi. This was not the end of the disaster, as the coming two days were to reveal. An aftershock came hurling towards the same region with a magnitude of 6.8!

Rewinding back a couple of years, Pakistan faced yet another series of humungous earthquakes. The first hit the area of Balochistan in October. The Richter scale measured its magnitude at 6.4. This is still quite huge. It was reported at a depth of fifteen kilometers. This was followed by a second earthquake of the same magnitude. However, this one was shallower than the first one, at a depth of fourteen kilometers. 215 people lost their lives in these natural disasters.

Not just this, the earthquakes left more than 200 injured and upwards of 100, 000 people homeless. This was one of the highest hitting Earthquakes in Pakistan’s history.

Even now, this earthquake is considered as the most destructive earthquake after 1947. The only one that comes close was in 1935. Out of all the earthquakes in Pakistan’s history, this one hit the hardest. The earthquake was centered around the area of Kashmir and it came around the morning hours of 8th October.

The magnitude of the quake was 7.6. The epicenter of destruction was Muzaffarabad. It was hit the hardest out of every city and area in that region. Due to this being shallower than any of the other earthquakes, the damage was quite high. It destroyed structures, cracked the ground and brought about nothing but more problems. There was no warning and the world was taken aback because of how severe this disaster was.

The death toll stood at a morbid and staggering 87, 350, although estimates put it above 100, 000. Over 3.5 million were rendered homeless and another 100, 000+ injured. Students were buried under collapsed buildings because schools were open that day.

In remembrance of what happened fifteen years ago today, the country conducted a moment of silence at 8:52 am this morning.