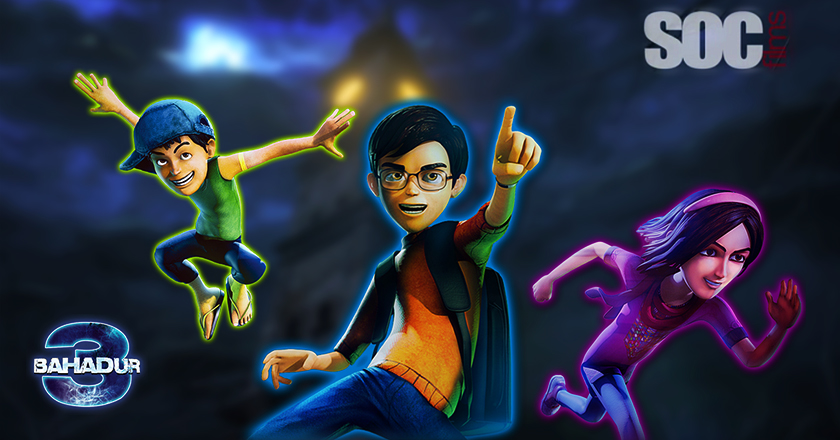 Waadi Animations proudly announce the return of the immensely successful #3Bahadur animated feature film, now with a Part 2! The animated film represents the second feature in the ground-breaking franchise, which grossed more than 6.5 crores the local box office, making it Pakistan’s first and highest-grossing animated full-length super hero feature film. #3Bahadur was released 22nd May 2015 in all digital cinemas across Pakistan.

Returning as voice actors in the sequel are Zuhab Khan as Saadi, Hanzala Shahid as Kamil, Bahroze Sabzwari as Deenu, Bassam Shazli as Pateeli and Chatpa and Hammad Siddiq as Ghutka and Shikra. Also joining the cast of #3Bahadur Part 2 are actor and musicians Ahmed Ali Butt as Gola and Ali Gul Pir as Teeli and Lolly along with Sarwat Gilani as Saadi’s mother, Salman Shahid as Baba Balaam, Arisha Razi as Amna, Mustafa Changezi as Tony and Zeba Shanaz as Parrot.

Read More: 3 Bahadur Movie Review: A Must Watch for Kids!

Speaking about ‘3 Bahadur’, Academy Award Winning Film Director Sharmeen Obaid-Chinoy said, “3 Bahadur was a very special project for me because it inculcated a sense of pride and ownership in Pakistani children. Now, with #3Bahadur Part 2, I want to make sure that Saadi, Kamil and Amna inspire bravery and fearlessness in every child across the country.”

3 Bahadur is an epic journey of friendship, teamwork and courage. Indeed, the first tale of three unlikely super heroes was the beginning a larger movement, making Pakistani children a part of the nationwide phenomenon that is “Team3Bahadur”. #3Bahadur Part 2 upholds this legacy with an endeavor to further inspire the children of Pakistan, with a film release in December 2016.