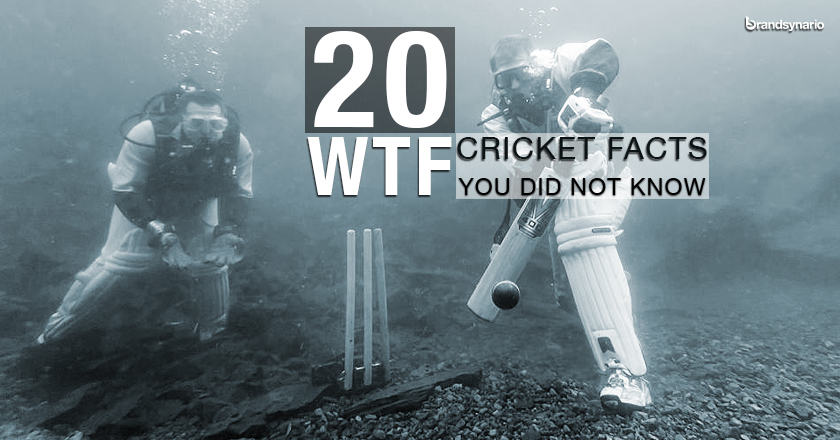 1. Unbelievably, most number of runs scored in one over is not 36; contrary to popular belief it is actually ‘77’ which was scored in RH Vance’s over in a match between Canterbury and Wellington. 2. Pakistani magician spinner, Saeed Ajmal surprisingly has never won a single award for the ‘Man of the Match’ in ODIs. 4. In the entire history of recorded Cricket, only four players have played on all ten batting positions for a team; names include Lance Klusener, Abdur Razzaq, Shoaib Malik and Hashan Tillakaratne. 6. The cricket lord, Sir Don Bradman hit a total of 6 sixes in his entire career. 7. Ex-Pakistan captain and veteran batsman Inzamam Ul Haq, not only bowled in International cricket, but he took a wicket on his very first delivery. 8. Sachin Tendulkar debuted in 1989, along with 23 other cricketers around the world. Not surprisingly each one of them retired before the little master, however what’s incredible is that the last one to retire was Chris Cairns of New Zealand who retired in 2004, ten years before Sachin Tendulkar eventually retired from international cricket. 9. The bat, with which Shahid Afridi scored his fastest century in One Day International, was borrowed from Waqar Younis. The record stayed unbeaten for over a decade, and is still the world’s second fastest century.

10. Dirk Nannes has played both for Australia and Netherlands, in International Cricket. 11. Can you believe that Shahid Afridi has twice as much runs and wickets in ODIs than the legendary Imran Khan.

Boom Boom Afridi has picked up 378 wickets in One Day International cricket in comparison to Imran Khan’s 182 ODI wickets, and has scored 7619 ODI runs from his strong wooden bat with a robust strike rate of 115.7 whereas Imran Khan’s 3709 runs has a strike rate of 72.65. 13. Asian little master ‘Hanif Mohammad’, holds the world record for the longest innings in International (and domestic) Test history, an astounding (nerve numbing) 970 Minute (that is, more than 16 hours) 337* against the dominating bowlers of West Indies in Bridgetown in 1957-58. 14. Hanif Muhammad by the end of his career had done almost everything imaginable in the game of Cricket. He scored 55 first-class centuries with an impressive career average of 52.32; moreover the ambidextrous Hanif could also bowl with either arms along with keeping wickets on a number of occasions for his country. 16. Wilfred Rhodes has taken a total of 4,204 wickets in his First Class cricket career. No, we did not make a mistake there, Rhodes did actually did take more than four thousand wickets. FYI; He also happened to score 39, 969 runs. 17. Indian pacer, Ishant Sharma can be deemed responsible for the three maximum scores made ‘against’ India, by a batsman in the 21st century. How? Well, he dropped catches from all of three of them, on scores below 50. 18. Not only does Wasim Akram have more ODI wickets than Shane Warne, but he beats him by more than 200 wickets in it. However, Akram lags behind Warne with 95 wickets in both ODI+Test Combined. 19. In all of 400 years history of Cricket, the fastest (electronically measured) speed for a cricket ball bowled by any bowler, ever, is precisely 161.3 km/h (100.23 mph) by Shoaib Akhtar of Pakistan to Nick Knite of England, on the 22nd February 2003 in the World Cup hosted by South Africa. 20. Shoaib Akhtar handed Sachin Tendulkar a Golden Duck the first time these two came head to head, it was a late reverse swinging delivery that knocked Tendulkar’s middle wicket off the ground. He had also bowled Dravid, with a similar reverse swing, one ball before Sachin. These two deliveries are called, ‘Double jeopardy’ when Shoaib Akhtar made his first International impact.